A Fiery week in Albert Square

When Eastenders announced there would be a fire in Albert Square it was difficult not to feel a little bit anxious about the storyline; it was only a few years ago since the Masood fire after all, was another dramatic fire really needed so soon? But the fire at the Slater household has been handled differently and whilst the stunt itself was very impressive it was merely the catalyst for the beginning of a new storyline for Kat and Alfie Moon. 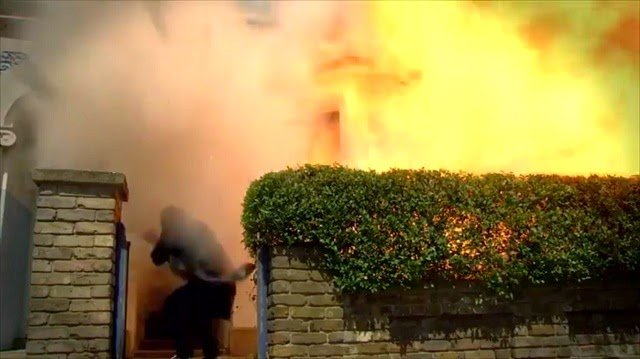 Over the past few weeks viewers have seen the Moons at their happiest following  the birth of their comically named twins Bert and Ernie (possibly the worst names in soap history) but then almost immediately at their lowest ebb as they tried to keep their heads above water supporting three children with Kat on maternity leave and Alfie out of a job. In a weak moment Aflie made the foolish decision to set the Slater home alight and claim on the insurance. Not his finest moment. Whilst the Slater women got dolled up and headed over to the Vic for Sharon’s doomed hen party Alfie put his dim witted plan into action. However, unbeknownst to him Kat came back from the party and headed upstairs for a nap. Cue a large fire, impressive explosions and the usual amount of screaming and shouting that is sure to accompany any fire in soapland. Only this was a little bit different. As heroic Alfie came out of the house with a lifeless Kat in his arms a point of view shot was utilised to convey his disorientation and confusion which gave the already pulse racing scene an eerie realism rarely seen in soap.  Credit must be paid to director Steve Finn, whose direction was brilliant, particularly during the aftermath of the fire, making the scenes powerful and intense to watch. As Alfie stood by Kat’s hospital bed and reviewed the damage his misguided decision had caused to her charred body he realised the enormity of what he had done- inadvertently nearly causing the death of his wife and the mother of his children. Shane Ritchie and Jessie Wallace have an undeniable chemistry that has made them the square’s power couple.  The scenes really pulled at the heartstrings and are probably some of Shane Ritchie’s best work on the show. 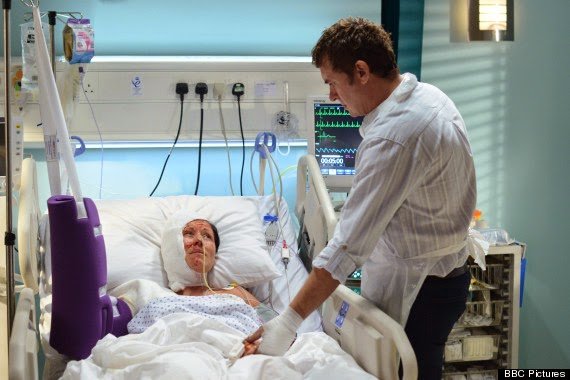 Alfie had previously told Mick Carter of his plan to set fire to the house for insurance purposes and whilst he didn’t agree with him, he had stood by him throughout the ordeal. However, Tosh, Mick’s sister-in-law who also happens to work for the fire service, became immediately suspicious upon learning of the Moon’s recent money troubles. To add to Alfie’s list of problems Mick alerted him that Tosh had reported her suspicions to the police! It is unlikely that Alfie is going to get arrested at this early stage in the storyline but it does raise the question as to what Kat’s reaction will be when she inevitably finds out that it was her husband who started the fire. It has been confirmed by Eastenders that Kat will be left disfigured in some way as the result of the fire and that the storyline will continue through Christmas and in the lead up to the show’s 30th anniversary in February 2015. The last thing viewers want is for Kat and Alfie to separate, they work as a couple and Jessie Wallace and Shane Ritchie have a natural, sparkling chemistry on screen but the build up to the reveal and Kat’s reaction has already effectively begun. We don’t yet know what Kat’s disfigurement will be but we do know that her appearance was very important to her, her strong make up has always been part of her character so it is curious as to how she will deal with facial scars and burns, and her reaction upon finding out it was her husband’s actions that has caused her injuries.

The storyline is set to run alongside the Lucy Beale murder plot and the Carter rape/ reveal storyline this winter giving Eastenders a very strong end to the year. Jessie Wallace and Shane Ritchie will surely do it justice if this past week is anything to go by and whilst it means more despair for the Moon/Slater household it is truly great to see them take centre stage once again in a dramatic storyline.

EastEnders Continues Monday at 8.00pm on BBC ONE