William Melvin Hicks: we miss you. Now here’s Tom with the weather.

There are very few reasons why anyone would want to be older than they are but I’d gladly have a few extra wrinkles to have experienced Hicks at his best. 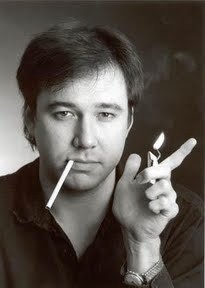 I was 9 years old when Bill Hicks died. I discovered him during my angry goth teen years and never, ever looked back.

BBC 4 last night screened an engaging biopic of Bill’s rise, fall and rise in comedy. If there was ever a reason not to destroy BBC 4, this was one. Bill was an angry, bile-fuelled polemicist who never shied away from speaking his mind. As Dwight Slade, Bill’s childhood friend, says: being a great comic is in tieing your inner and outer voices together, saying what you think and not being afraid to offend.

Bill, born in 1961, was a teenager of the post-Vietnam society. Proud to be an American, yet ashamed of his great country’s failure to be responsible with its power, Bill is just as relevant today as in his heyday in the late eighties and early nineties. It’s hard not to wonder what he’d make of the ‘War on Terror’, 24-hour rolling news, Murdoch’s Fox News, Glenn Beck and the meteoric rise of Justin Bieber: “when did mediocrity and banality become a good image for your children?”

Hicks had a view on everything from the evils of advertising and ‘the devil’s music’ to dogmatic creationist types and the anti-intellectualism that still rages throughout the Western world.

This biopic, both informative and beautifully animated, didn’t focus on the comedy, but the man: where did he come from and how did he get to be nominated as the ‘comedian’s comedian’, winning worldwide accolades? We heard from both friends and family, who talked of his love affair with mind-altering substances and a struggle against alcoholism.

“I’m here to be a comic” were his first worlds to a promoter on arrival in LA at the tender age of 16. Starting out as a sober, ‘clean-cut’ comedian, Bill couldn’t have grown to be a more different comedian as his life on the road and rejection as a script writer embittered him. Starting his quest to find his voice involved taking psychadelic mushrooms and his first taste of alcohol was 7 Margaritas, downed in quick succession.

Hicks spent a lot of his time on stage, waxing lyrical about the positive power of drugs. I felt BBC 4 was brave to involve a psychadelic montage along with Bill’s stage material on the negative image that the media portray of drugs and the ‘morons’ who fall foul of them.

Bill’s drinking and substance abuse eventually got the better of him though, reaching the point where audiences viewed his appearances on stage as an alcohol endurance test, his adrenaline inuring him to the worst effects of alcohol until he reached the stage where he lay prostrate on the floor, spouting hate-filled rants at the world and audience alike.

“I left in love, in laughter and in truth and wherever truth, love and laughter abide, I am there in spirit.”

A documentary for fans of Hicks rather than the uninitiated, the programme showed rare footage of him away from the spotlight; with his parents, his nieces and nephews and Dwight Slade and Kevin Booth, his best friends. We also saw the devastation the news that Hicks was suffering from pancreatic cancer brought. It was a poignant moment to hear Mrs. Hicks recounting the story that when Bill came home after his first bout of chemotherapy, he went out to the deck at the family home. As he was normally somewhat of an outsider amongst his nearest and dearest, Mrs. Hicks asked him if he’d prefer to be alone. “Who wants to be alone?” he asked.

For me, this documentary makes me melancholic and nostalgic for my teenage self. Listening to his posthumous albums, Rant in E-Minor and Arizona Bay, again I find myself wishing that there were more comics like him in the world today, lampooning the state of affairs and asking questions about the facile and inane, questions about our governments; questions that we’re uncomfortable answering. Hicks is often seen as a jaded, dark, didactic comedian but, to me, he was a man with a beautiful message. Life – it’s just a ride.