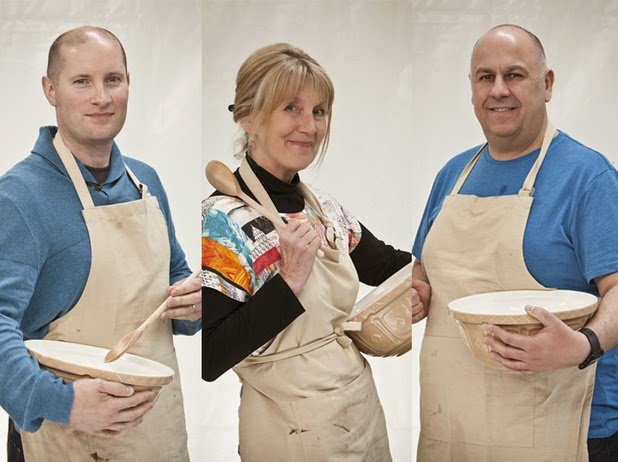 With it being the Bake Off final we had the festival of family and friends gathering to greet the bakers outside the tent whilst us at home had to endure the ‘treat’ of the cameraman getting over-excited with a new slow-motion toy that the beeb had obviously hired out of their ‘ratings winning finals’ budget pot. I for one just felt bilious.

The bakers had three and a half hours to create a viennoiserie – that’s breakfast pastries and breads to you and I. This challenge saw them baking two different types that could include pan au chocolat, Danish pastries and anything else they desired. The judging duo were looking out for a good flake, laminated (layered) dough and breads that had a bounce. Luis plumped for apple, walnut raisin and Cheshire cheese chaussons which Paul described as a ‘great bake…with a nice bit of a flake going on.’ Mary described them as a ‘winner’ but was less set on his pan au chcolat with raspberries and cream declaring ‘they don’t work for me at all.’ The main issue being an unfortunate incident with the cream curdling like cream cheese. Richard braved two differing doughs for his offerings. His pear pan au chocolat had a buttery overload that Paul was unimpressed with whilst Mary thought the ‘pear and chocolate go really well together’ though his laminated dough didn’t show distinct layers. Richard’s pan au lait made Paul see red. The tell-tell tearing strip on the side saw Paul rant ‘this isn’t a batch bake! They should not be touching. I’m upset about the joining.’ Despite that he praised the ‘great bake, great texture.’

After ten weeks of head-scratching, apron twitching technical challenges. Remember Week 3’s ciabatta challenge that saw Norman’s length described as ‘good’? Or Week 6’s Princess cake that had twenty six individual stages and saw Kate’s effort result in a playgroup green Play-Doh mess? Well, in a clever twist it was back to baking basics for the final. The trio had to bake-up 12 mini Victoria sandwiches, 12 mini tarte au citron and 12 mini scones in two hours. Expectations of light fluffy sponges, well-risen scones and pastry filled with smooth custard were high. With only three bakers left in the tent there’s always a lot more screen time for their inane ramblings and self-narration ‘I let the machine do the work as much as I can.. I haven’t got the power to pummel it’ declared Nancy. Richard, who spent most of the final week swirling his piping bag around like a teenage majorette had a more intimate confession ‘‘I’m just bashing my butter up’ he revealed. This was quite the revelatory round for the last week; despite being staple bakes the lack of recipe and volume required meant for some shaky bakes and frayed nerves with even Richard declaring ‘I’ve felt calmer than this!.’ His scones were eventually praised by Paul ‘they’re a good consistency…nice and soft. Nice flavour.’ His Victoria sandwiches fairing less well ‘the jam is too runny’ thought Mary. But it was some unfortunate icing of the tarte au citron moniker that saw Richard placed 3rd ‘I can’t read that…tarte au…colon?!’ said an aghast Paul. The insides not doing any better. ‘They are totally over-baked and the mixture has curdled. Sort of a sweet scrambled egg.’ Nancy’s triptych received near full praise. ‘A lovely texture, nicely baked’ though Mary of her scones despite Paul thinking them ‘a bit dry.’ Her Victoria sandwiches had ‘a very nice colour’ and ‘perfect bake all round’ thought Mary but Nancy should’ve liberated Richard’s piping bag as her lack of piped cream saw Paul shriek ‘this is the final of the GBBO, Mary! YOU PIPE!’ And soon it’ll be time for you to pipe down, ay Paul? Successfully completing the set was Nancy’s tarte au citron’s. With Mary praising the essential shine and Paul finding them ‘nice and sharp..not bad at all’ saw Nancy crowned 1st place at the final gingham altar pilgrimage.

And lo, after a stomach churching technical, we arrived at our final showstopper of the series. We’ve had 3D biscuits that saw Luis create a George and the dragon scene with fiery flavours, weeks 4 was a baked Alaska kitsch-fest with added ice cream tantrums and week 7’s éclair round that saw Mary ‘six inch’ Berry take things to a whole different level. This week was a stunning pièce de résistance in the form of a pièce montée. A spectacular, elaborate patisserie centrepiece the bakers had 5 hours to create in a formation that referenced them personally. It was, as Paul declared, the ‘ultimate patisserie challenge.’

In a final final round that fitted Luis’s flair perfectly he built an epic mining scene referencing his home village of Poynton. It was formed of chocolate and vanilla cakes, orange and almond and chocolate and hazelnut cakes. Decorated with mini choquettes and mint macaron and topped with a chocolate biscuit wheel. The magnificent aesthetics showed ‘a lot of skill’ thought Mary and Paul liked the biscuit and profiterole wheel ‘clever…it really is a piece of art.’ The sponge layers were described as ‘stroking’ by Paul who was particularly partial to the hazelnut. Mary felt the chocolate one a ‘little bit dry’ but both silver foxes were in praise of the wheel topping. ‘Your skill in the piping…is very very good indeed’ thought Mary with Paul going as far to say the chocolate biscuit was ‘beautiful.’ Nancy equalled Luis in the creativity stakes with an exquisite Moulin Rouge featuring a full layer cake, mini shortbread decorations and red caramel sugar work windmill sails. Mary looked like a proud Grandmother when it was presented to her ‘you should be very proud of that’ she beamed. Despite Paul chastising their roughness Mary thought the shortbread ‘first-rate’ with the sponge equally as successful ‘the flavours are good. Beautiful’ Paul thought.  Mary was thrilled with the passion fruit profiterole flavours ‘it’s very intense, slightly sharp’ she trilled.

And there, Bake Off fans, we have it. As the three carried out their bakes to the awaiting crowds, and Mel danced around with the trophy like she’d won Wimbledon, we waited a length of time that felt longer than Titanic for the winner to be announced as NANCY! I have to admit I really couldn’t call it, but my gut instinct was leaning toward Luis. However there is not doubt Nancy is the deserved winner – she was consistent, fastidious and experienced. ‘She has the instinct, she loves baking and is a perfectionist’ summarised Mary nicely. And that’s it, after a witty montage summarising the bakers activities since the show, the tent folds down for another year. Thank you all so much for reading this blog over the last ten weeks. I hope you’ve enjoyed it, and the show, as much as I have.

See you next series!