This week in the big white tent the bakers’ teeth were calling out for help.  It was the first ever Bake Off caramel week and it felt like it was Prue’s yin to Paul’s bread week yang.  It was certainly Prue-centric and all the better for it as she let us see more of her personality with her setting and judging her own technical challenge and, boy, was it a tricky one.

The bakers were pushed to their limits with this week’s three tricky and sticky challenges.

A super sweet signature with a delicious millionaire’s shortbread where all the bakers choose to diverge from the olympic standard with pecans, coffee liqueur, orange and even rum making an appearance. As usual we ended up with a mixed bag of toffees including a Hollywood handshake.  Stroopwafel, or double Dutch syrup filled waffles, were the technical challenge this week and the bakers had never seen them before in their lives.  To make matters worse they had one chance to practice with all other waffles being put in front of the judges no matter the disaster.

Finally the bakers were tasked with a caramel cake showstopper with a mandatory spun sugar section. Not much to ask for really. In a week of sweet treats and burnt sugar the highlights were:

Golden moments of the week:

Crystallised disasters of the week:

Star baker: Kate. Her sugar firework and toffee apple showstopper was wonderful and Prue named it “the best cake [she’d] ever eaten in [her] life”.

Who left the tent: Tom.  His millionaire’s shortbread was awful, his waffles were terribly baked and his showstopper caramel cake was raw and had no caramel in it. No-one was surprised to hear he had never made the cake before.

Who’s for the chopping board next week?: James.  He struggled in every challenge this week and was only saved by Tom being even worse than him. 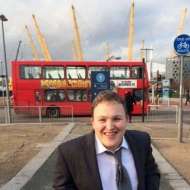