Biscuit week falls a little flat on Bake Off 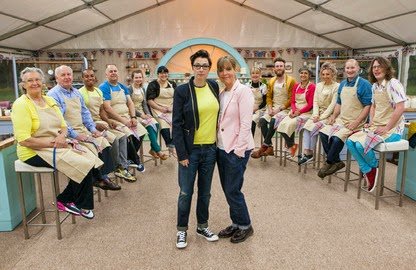 Predictably last week’s return, and the show’s first outing on BBC One, garnered a eggsational 7.5 million viewers and a wealth of press coverage and social media chat. I’m sure the beeb are rubbing their flour-covered hands. It’s perhaps unsurprising this week’s second instalment felt a somewhat more sedate affair. Despite my claim last week that the show’s move to One had been without fanfare, hindsight is a beautiful thing, and it’s clear the elements we all love were ramped-up for the debut – week two was less smut more substance affair and all the better for it. As is standard for a knock-out format we got to know the contestants more intimately and the editing was less blatantly preferential to those heading for the chop (Last week: Claire squeals…Claire cries…Claire leaves.) We know our character’s well now, so it’s time to watch the story unfold. Do you like my theatrical analogy? Good. Me too.

It was biscuit week for our eleven remaining dent dwellers and, as ever, was a far cry from the dry-mouthed Rich Tea image that category may invoke. The opening signature challenge was a gargantuan bake of thirty six cheese-related morsels with some…er…disparate results. Parmesan and apple shortcake anyone? It’s only seconds in to the round before my Bad Egg from last week, Enwezor, manages to make my inside’s itch: “These are big sunflower seeds!” he exclaims wide-eyed as he clings on to his dignity much like his children to his ankles in his introductory film. His pumpkin and sunflower savoury biscuits – using three types of flower no less – “lacked a kick” according to Paul. Despite not being to my taste there’s some impressively inventive bakes from a category that does feel rather lacklustre in scope; sweet Chetna stepped-out of the shadows with her fenugreek and carom crackers. (Anyone else have to check if fenugreek was an actual thing?) Paul sultrily declared them “full of flavour…gorgeous.”  After his ropey form last week Irish charmer Iain had his za’atar and fig biscuits dismissed for their hotchpotch flavour. Despite his charm I fear the icing is most definitely on the wall for Iain. It was another good week for Nancy – Nancy is like the kid at the back of the class who says little and then comes out with a cut-down so sharp it could slice your finger off. Her Fennel and rye thins got Mary all of a quiver: “an even, pale bake..exactly right for me!” she trilled. Builder Richard, simultaneously playing to stereotype – pencil perma behind ear – and against it –an absolute gent – had his poppy seed and rosemary crackers analysed by Paul, who declared the flavour balance a resounding success as rosemary can be rather “soapy”. Cue a shower-based image I simply cannot un-think.

The technical task saw Mary task our bakers to concoct eighteen florentines from the usual skeletal guidelines. There wasn’t a dry brow in the tent as this particularly nut-based challenge was received, primarily, with horror. They must be “lacy and crisp” purred Mary. As an audience we, on the whole, root for our bakers but during this round I can’t help but delight a little in the panic it can causes: no timings! How do I shape them?! Obsessive oven-watching. It even prompted poor Jordan – another sterling week of bonkers from him – to declare “never in my life have I chopped nuts one at a time!” However watching Chetna coat hers in chocolate without abandon like she was slapping grout on a tile was a beautiful moment. With another shaky round for Iain and, be still my sobbing heart, Enwezor, Richard was declared the eventual winner. Beaming from ear to ear (and pencil) “it feels pretty brilliant” he grinned.

To the final showstopping round where the gang were tasked with creating a 3D biscuit scene, with Mel declaring it can be “a funfair, a wedding, a swimming race in the leatherhead lesuire centre”. And some of the bonkers builds weren’t far off that. A truly great showcase for the talent of the bakers the round was a gruelling four hour bake, endless precision baking and cutting and certainly lived up to its name. Each effort was a genuinely impressive construction. Lovely furniture restorer Kate, despite worries over her sitting people, constructed a family tea time scene announced as “bold and clever” by Paul. Luis, so far a competitor very much under-the-radar, built an exquisite George and the dragon scene. Paul revelling in the fiery dragon flavours that slowly unleashed themselves on his palette.

Diana, another baker on thin icing with Iain, secured her place in the hearts of the over-sixty audience, and most probably all of us, as she dejectedly observed the “different flavours the young people are using” upon spotting Martha’s ski village masterpiece. Her declaration that the last two weeks have made her realise “how behind the times she is” was an honest, and slightly naval-gazing, declaration for Bake Off – with the show itself being at least partially responsible in shaping a modern generation of bakers. Deep-and-meaningful aside, her 3D train won substantial praise from Mary, who declared her pinwheels “just perfect.”

And to the denouement where Iain, Jordan, Enwezor and even Stormin’ Norman were all ripe for the chop. It was genuinely tough call for this second week. BUT OH PRAISE BE, we saw Enwezor given his marching orders in what, despite my berating, felt a genuinely surprising exit. To his credit he was magnanimous in loss. The star baker of the week, and my Good Egg from last week (*polishes crystal ball*) Richard was a deserved recipient of the title. And there we have it, another week, another Bake Off. I don’t know about you but it’s only week two and I certainly feel it could to be a fight to the death with this year’s bunch. I’ll be on the front row. See you there! 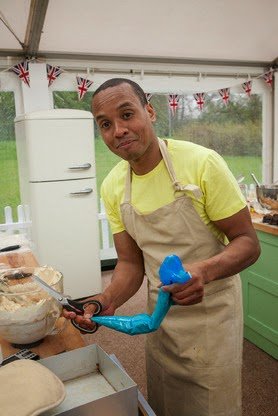 Nancy. I think we’ve only scratched the surface of this cheeky chappess.

It’s a close shave but Iain is surely next for the snip.

Read our Review of Week 1

Contributed by Craig HeathcoteThe Great British Bake Off Continues Wednesday’s at 8.00pm on BBC ONE.