Black Mirror Season 3: Which is best?

If ever there were a fitting time for Black Mirror to return to our screens, 2016 certainly feels like it. In these strange times that we live in, we’ve seen the themes of some of the series’ earlier episodes come to life this year with the rise of Donald Trump (season two’s The Waldo Moment) and this past summer’s Pokemon Go craze echoing the smartphone manhunt in season two’s White Bear. Part of the fun/terror now derived from watching the show is wondering which prescient story will we be dealing with for real in the not so distant future. Moving from Channel 4 to Netflix for it’s third run, this new season of six episodes maintains the high quality and often chilling storytelling of it’s previous seasons, albeit on a visibly bigger budget. 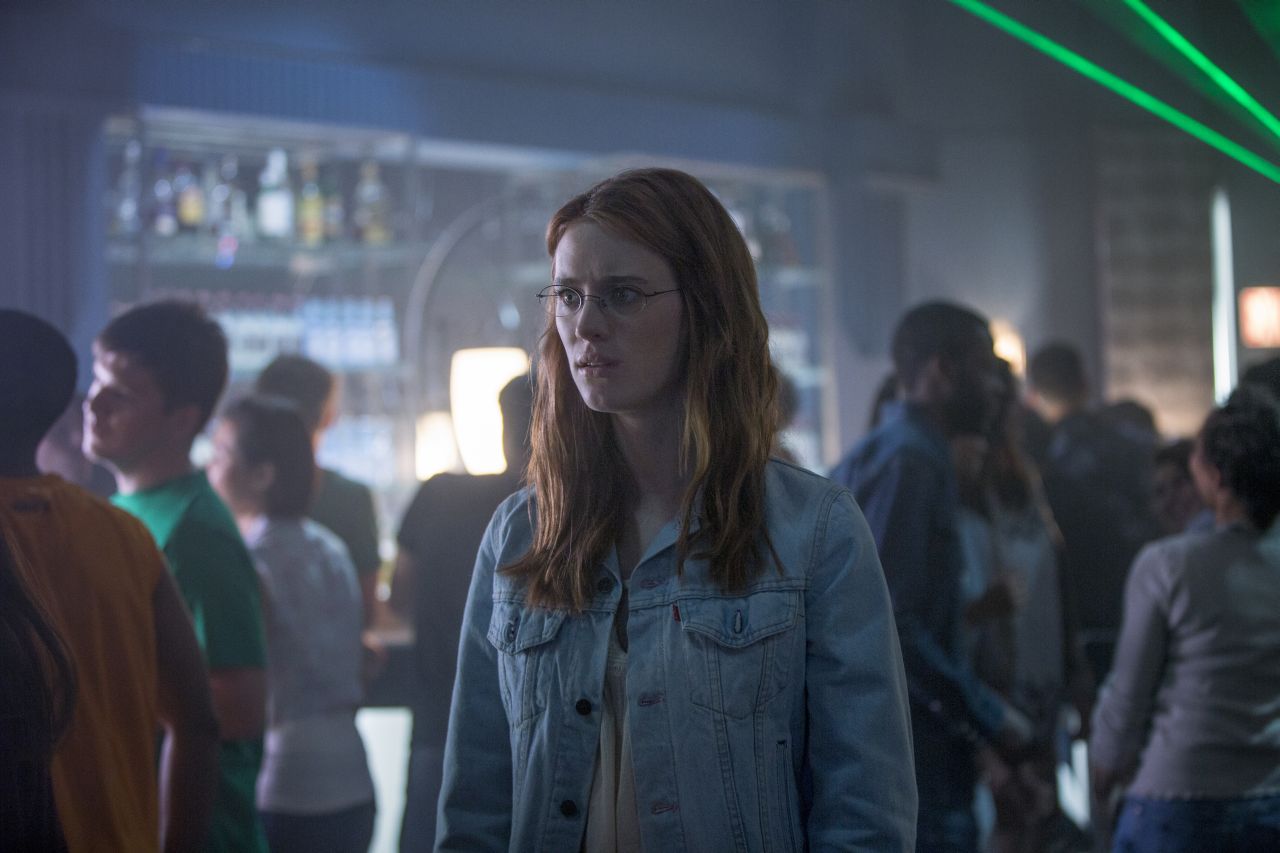 The opening episode Nosedive is one where you can see this new injection of cash onscreen. Set in an aesthetically pretty world, it follows Lacie Pound (Bryce Dallas Howard) as she desperately fights to raise her social media standing in a society that’s based all around how high your rating is. Of the six new episodes, this is the one that most struck a chord with me in that it was quite close to our current reality. In an age where our real lives and our social media profiles are inextricably linked and where “digital influencer” is an actual career, the storyline in this episode doesn’t seem like a massive leap from where we are today. As it stands, we already show our approval with likes on Facebook, Instagram and Twitter and by swiping right on Tinder and we live in a world where high follower numbers on social media are used as a barometer of a person’s worth in certain circles. Lacie’s world, where every single interaction is rated, from service in a coffee shop to a simple conversation in an elevator, could easily be seen as a slice of what’s to come in a few years time. The storyline itself is probably one of the more whimsical entries in the entire Black Mirror catalogue. After receiving an invite to be a bridesmaid at her premium rated friend Naomi’s (Alice Eve) wedding, Lacie strives to enter the big ratings league but is faced with a catastrophic comedy of errors along the way. The ubiquitous James Norton plays a small role as Lacie’s brother Ryan while the equally ubiquitous Michaela Coel has a fun cameo as an airline check in lady. As an opener, it’s as thematically relevant as Black Mirror always is while being a welcome departure from the often grim worlds that previous episodes have been set in. 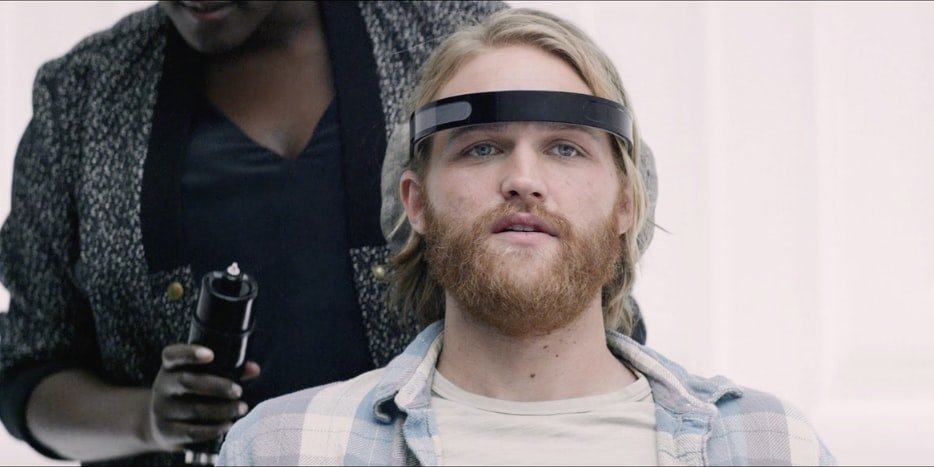 In episode two Playtest, we’re momentarily back to grey reality, as we follow American backpacker Cooper (Wyatt Russell) as he arrives in London. Broke and trying to fund a flight home, Cooper signs up for a video game trial that soon begins to go horribly wrong. In one of a number of nods to the original series, Hannah John-Kamen from season one’s Fifteen Million Merits appears in a supporting role as Cooper’s love interest Sonja. Wyatt Russell’s performance as the dude-ish Cooper, struggling with his own demons while having his reality altered, is the main attraction of the episode as he adds new facets to the college stoner trope that we’ve seen a thousand times onscreen. The plot device of “broke backpacker getting involved in something dodgy for cash” is also a well worn one (seen recently in BBC One’s New Blood) but as this is Black Mirror, it plays with it well, exploring themes of family relationships, guilt and what happens when you augment someone’s reality. This elevates the episode and allows it to mine something deeper from a story arc that is usually the fare of generic horror films. 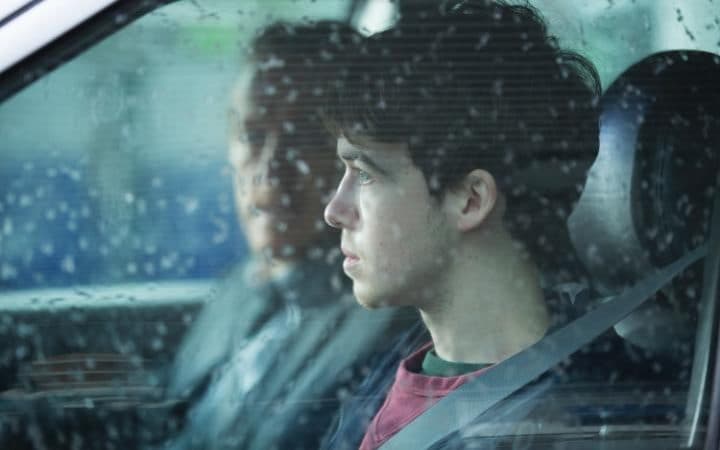 Shut Up and Dance is the third and probably most harrowing episode of the new season. There are no bells and whistles or shiny future worlds in this hour. It looks at internet security and cyber crime and is set in the present day reality of modern Britain. We meet teenager Kenny (Alex Lawther), a quiet, put upon fast food restaurant worker who lives at home with his mother and sister. After getting a virus on his laptop, he installs a programme called Strive which removes the malware but unknown to Kenny, begins recording him on his webcam. When the camera records Kenny masturbating to material on the laptop, he receives an email bringing his attention to this and a campaign of blackmail begins. This campaign puts him in contact with a number of others who are also being blackmailed, most notably Hector (Jerome Flynn), a married man who has been recorded with a prostitute. As the episode progresses, the stakes get higher but the main theme of internet security and people’s often laissez faire attitude to it, is one that’s very grounded in today’s world. This episode put me in mind of season two’s White Bear in that it can be quite tough and jarring to watch at times, as we see meek young Kenny being tormented by his blackmailers, only for the whole thing to be flipped on it’s head at the very end. 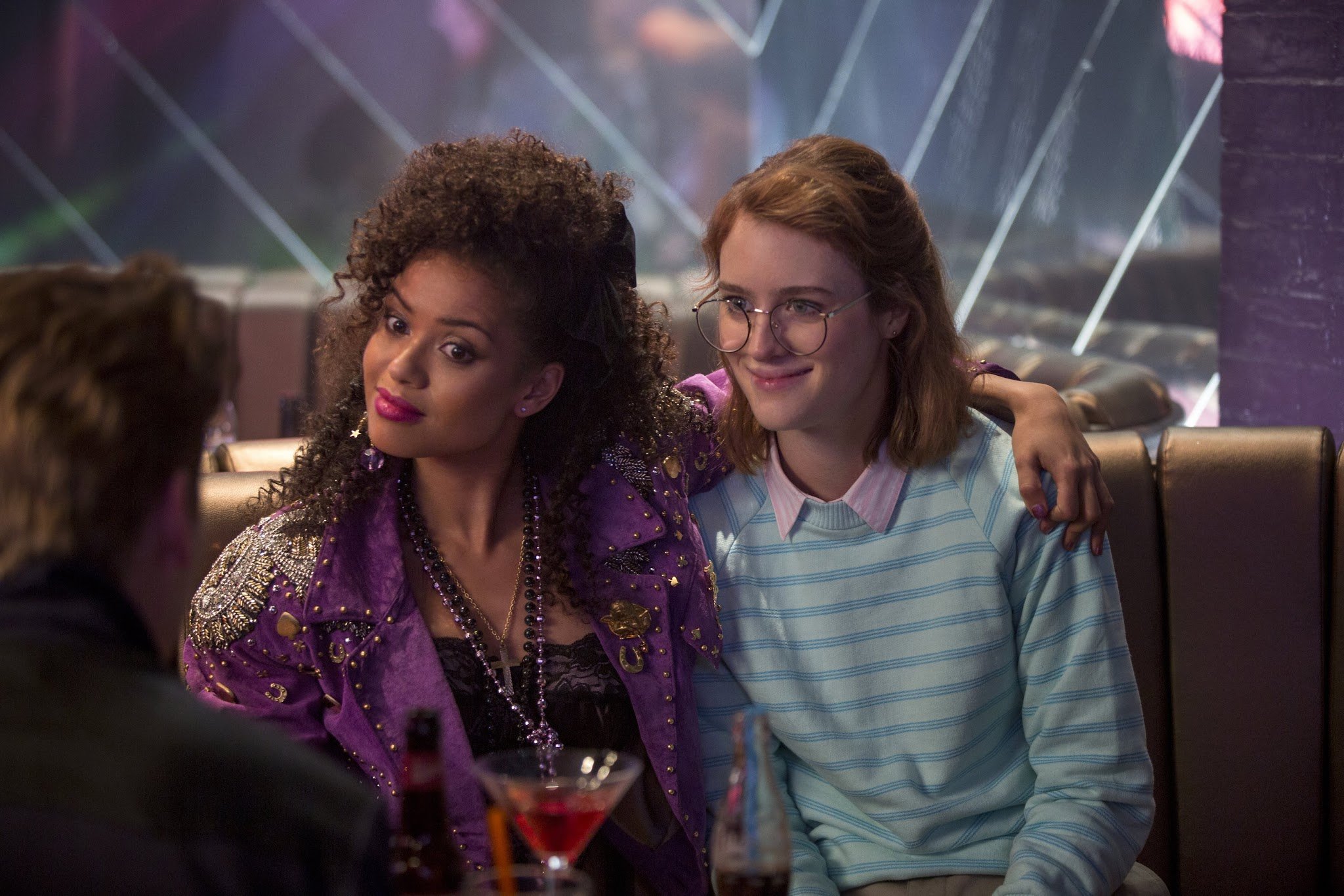 San Junipero is a welcome relief following the darkness of Shut Up and Dance. This fourth episode is probably my favourite of the new season. Opening in a seaside community in 1987, it follows the love story of two young women, shy Yorkie (Mackenzie Davis) and outgoing Kelly (Gugu Mbatha-Raw) as they jump across time between the future, the 80’s, the 90’s and the 00’s. Like Be Right Back, my favourite episode from season two, it explores themes of life and death and how technology can alter the process of passing on as we currently know it. Everything about this episode is beautiful. The performances from Davis and Mbatha-Raw along with the writing are truly heartwarming and you immediately engage with their characters as soon as we meet them. Visually, it’s the best of this season too, as we’re treated to lush landscapes, bright neon streets and some wonderfully 80’s stylings. This is probably the most filmic looking episode of what overall is a very filmic looking season. And despite death being one of the main drivers of the plot, it is an episode that along with Nosedive, offers a warm break from some of the series’ more grim offerings. San Junipero is an episode that I will visit again and again. 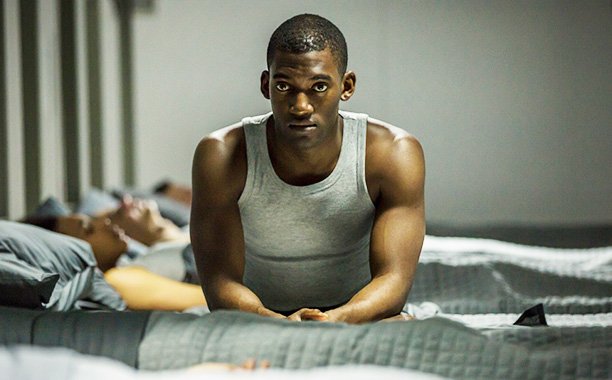 Possibly because the episode preceding it was such a high, I couldn’t really get into episode five Men Against Fire. Set in the future, it follows soldier Stripe (Malachi Kirby) as the army battles against “roaches”, a human / mutant hybrid. During one encounter with the roaches, Stripe is flashed with a green light device that they are carrying and he subsequently begins to experience side effects via the implant that all soldiers are installed with. In the era of drone warfare, the theme of the psychological effects of technological warfare is a relevant one but this episode doesn’t quite hit the mark. I found it to be meandering at times and it didn’t hold my interest in the way that other episodes did despite the fact that it was one of the episodes that was grounded in some form of reality. The early appearance of the roaches gave me some hope for an In The Flesh type zombie arc but this is really a bleak portrayal of the life of a soldier in an age of ever changing technology. And while it is a timely story to tell, it just doesn’t come together as well as the other episodes of this season. 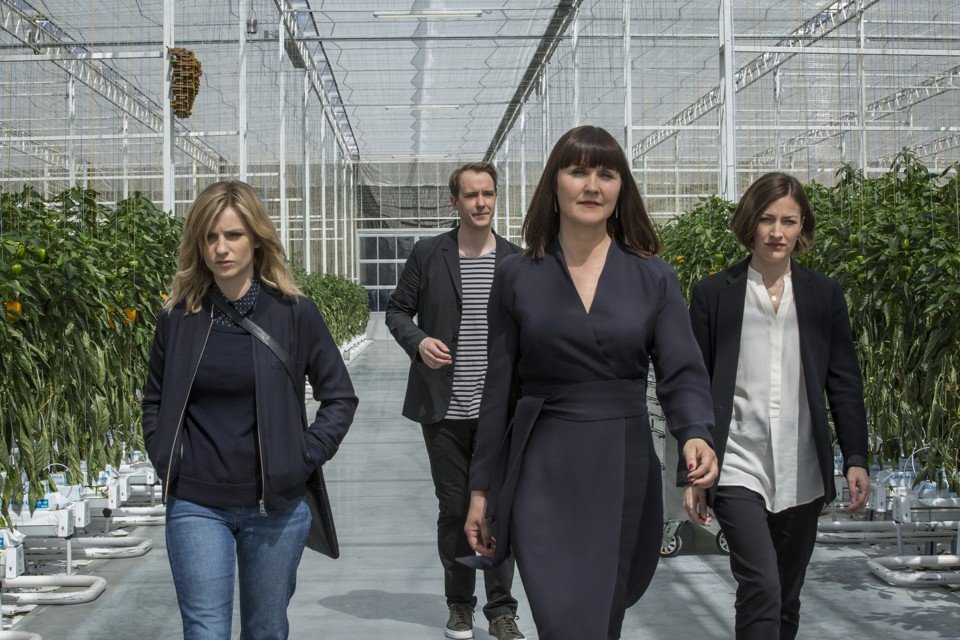 The sixth and final episode of this season Hated in the Nation is Black Mirror’s longest of any series, clocking in at ninety minutes. This extended episode time allows it to play out more like a feature film which it does feel and look like, again thanks to the larger Netflix budget. Detective Karin Parke (Kelly McDonald) and her new partner Blue (Faye Marsay) investigate their first case together after Katie Hopkins-esque columnist Jo Powers (Elizabeth Berrington) is found dead in her home following a social media hate campaign against her. A short time later, rapper Tusk (Charles Babalola) dies following a similar campaign against him and the police soon realise that there is something much larger afoot. Charlie Brooker has stated that Scandi Noir series like The Killing and Borgen were among the inspirations for this episode and this is evident, as it does play out like your typical police thriller initially, until of course the usual Black Mirror twist comes into play and it suddenly turns into a mash up of The Swarm meets Terminator. The social media angle is another timely story arc as it looks at how hate campaigns can affect those that they target. It may be done in a more dramatic fashion than in real life but it illustrates how people’s seemingly flippant remarks online can often cause devastating harm to their targets and in some cases, loss of life. McDonald and Marsay’s portrayal of the tough veteran and the inquisitive, knowledgeable newbie are a dynamic pairing that drives the episode, in what proves to be a strong closing statement to the new season.

Discounting the misfire that is Men Against Fire, this is a solid return season for Black Mirror. The episodes are all well cast with Bryce Dallas Howard, Alex Lawther, Jerome Flynn, Mackenzie Davis and Gugu Mbatha-Raw being particular standout performances. The writing is sharp and as thematically terrifying as ever. The direction is excellent and at times just beautiful with Dan Trachtenberg’s video game hell of Playtest and Owen Harris’ magical San Junipero being some of the more memorable. And as ever, Black Mirror leaves you questioning your relationship with technology and social media and wondering “what if?” about the various advances that it portrays. With stories involving paranoia, horror, romance and fantasy, this new series of Black Mirror is a box of delights that should have something to please everyone.

Black Mirror is available to watch in full on Netflix.