Black Mirror: We Wish you a Very Bleak Christmas

‘There’s nothing in this that’s as bleak as whatever the f**k EastEnders is going to do’ claims Charlie Brooker in the casually scornful manner in which only he can. Speaking at the preview screening of White Christmas, last night’s ‘festive special’ of his dystopian Channel 4 anthology Black Mirror, I have to disagree with Brooker. The ninety minute feature length special of his disconcerting dystopian drama was markedly more gloomy and disturbing than your average shouty, death-strewn festive soap instalment. But an incomparably more insightful, entertaining piece of television. 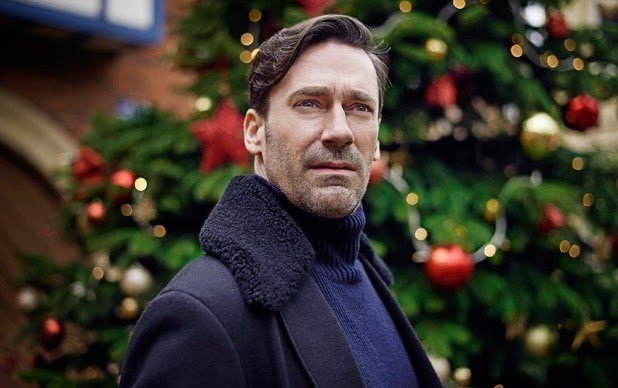 The first-rate cast was led by Mad Men’s Jon Hamm. On paper a dream bit of casting yet, I would suggest slightly typecast, it did feel a wise move for Hamm as he prepares for a career beyond his whiskey swilling, philandering character. Brooker wrung out any morsel of festive cheer we’ve got left with three separate satirical tales prophesying a technology led future at Christmastime all with equally disturbing codas. The collection was conjoined by Hamm’s anonymous character and Joe, played by the increasingly versatile Rafe Spall, both of whom are mysteriously ostracised in a desolate snow covered hut swapping their stores. 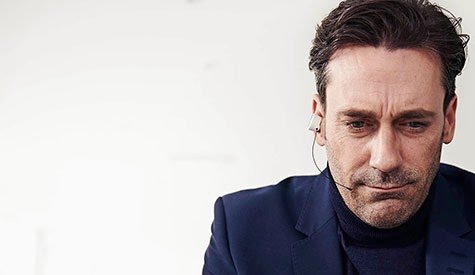 This grim fairytale opened with Hamm’s, smarmy character attempting to prise a conversation from the awkward Joe. Regaling candidly about his previous life transported us in to the first of the disturbing tales. Usually I find the ‘And so one day…’ devices that leads the viewer in to flashback’s notoriously hokey and hard to do elegantly in drama but last night’s dialogue was so clever and spikey I barely noticed the transitions. Hamm’s character revealed his double life as a dating guru figure offering ‘romantic services’ by night to men who are less…socially gifted, than himself. Via headset and the ‘Z-eye’ retina camera he suavely coached a gawky guy to chat-up a sultry brunette at a Christmas party. In an app and internet dominated world it’s a story that Brooker astutely knows will resonate with a large majority of the singleton audience.

It foretold a next-level dating development that feels horrifying closer than we’d like to admit. As Brooker ruminated in the Q&A session that follows the screening ‘Google Glass is going to morph in to something you put in to your eyes. Hopefully that’s at least six months off…’ The subsequent death of Hamm’s clueless novice at the hands of his lust object was a subtly horrifying watch, and certainly not the happy ending both men wished for. This opening tale was a brilliant reminder of Brooker’s deft skill at juggling the laugh-out-loud to sofa-clutching tension or despair. As Hamm, an amenable yet subtly intense character in person, observed at the screening, ‘humour can be found in the darkest places.’ For me last night’s ninety minutes flagged significantly during the second story with the connecting ‘but this was my day job…’ device for Hamm feeling crowbarred in.

However the second story introduced one of the most recognisable ideas from the whole show – the blocking device. But not on social media, not on your phone – in person. Hamm’s wife so incensed by his moonlighting blocked him – a facility that blocks your fellow being and turns them in to a pixelated, muted figure for a limited, or infinite, period of time. It was a likely but wonderfully observed idea from Brooker and even prompted one journalist at the preview to admit crippling guilt because of blocking an ex on social media that day. Brooker looked justifiably satisfied he had done his job. The ensuing story saw Hamm’s character provide wealthy clients with the gift of their own consciousness attached to a processor planted in an egg shaped object. I’m not denying Oona Chaplin gave a strong performance as the ice queen client and the sequence that saw her watching herself, being slowly tortured in a cycle of her own consciousness by Hamm was another gloriously gloomy moment but this story just didn’t resonate to the extent of its companions. It was a bit too over-wrought. Or maybe the problem was it felt five more years away from becoming a reality than Brooker’s other predictions.

With that said, Brooker had saved his most despairing, tragic tale for anti-festive finale.  Until this point I feared Spall was being outrageously under-used but this final tale saw him acting Hamm off the screen with a quite frankly astonishing performance.

Spall’s Joe discovers his wife is pregnant; she doesn’t want the baby– was enough but her decision to block him, permanently, after his fiery reaction led us down the darkest of avenues. In a beautifully written sequence Spall conveyed the devastation and frustration perfectly as we witnessed the results of his block. Not only was he incarcerated for going within metres of his ex he was devastated to learn she had kept the baby –a daughter – and she was blocked to him too. I doubt there were many a cold techie heart watching last night that wasn’t softened by the sight of Spall’s Joe turning up year after year to watch his daughters pixelated figure play in the snow. The finale saw Brooker handle some brilliantly clever twists upon twists, though perhaps not entirely necessary as his points had been made plainly, it was a deftly handled conclusion.  As said in the Q&A ‘reality has a habit of catching up with dystopian visions’ and it’s clear Brooker is one of few auteurs, and Channel 4 with the much mourned Utopia one of the only UK broadcasters, to be handling such contemporary moral and social topics. All set to a festive, snow covered backdrop with a disturbing purgatorial ending for Spall’s Joe suggest Brooker has successfully out-gloomed the East End rivals whether he likes it or not.