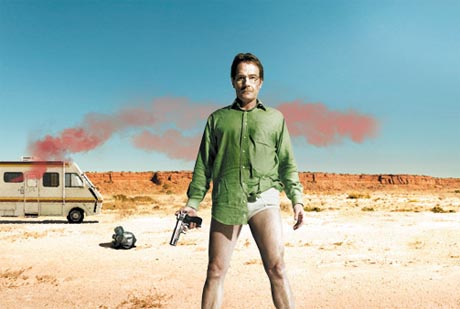 With our weekly dose of Dexter on FX now finished, the channel seems to have picked up another beauty with Breaking Bad. This first episode was intriguing, original, funny and frightening all at once. We have high hopes.

• For a start, the wonderful Bryan Cranston (Hal from Malcolm in the Middle) plays the lead, Walter H. White. Cranston was always the real star of Malcolm thanks to his gift of comic timing and impeccable physical comedy, but anyone who recalls his turn as a guest star in The X-Files years back will attest that he has real range as a serious actor, too.

• In this series, Cranston plays a character working hard to provide for his pregnant wife and disabled son. He’s a chemistry teacher by day and works shifts at a Romanian-run garage after work. He’s mocked by an odious brother-in-law, his birthday is miserable and then he discovers he has lung cancer and has just two years to live. The shifts in his psyche, the way in which the audience is immediately compelled to root for Walter and therefore understand exactly why he decides to resort to manufacturing crystal meth, were handled extremely well.

• The opening sequence was worthy of an superior Hollywood thriller. A lonely pair of trousers flapping to the ground, a Winnebago careering through the desert, Walter wearing large white Y-fronts, dead bodies in the back and an unconscious person in the front with a gas mask on. Walter, afraid yet defiant, stands and points a gun towards some sirens echoing from the dusty road ahead. Talk about grabbing the viewer by the neck.

• Something of a rarity – a disabled character in a drama. Played by RJ Mitte, who, according to IMDB, has a ‘mild case of cerebral palsy’, Walter Jr was handled very nicely, as a rounded character who will give lip to his Mom and joke with his Dad.

• Some excellent comic moments in the script. Brother-in-law Hank was a rich seam. A top cop, he talks about the subject of his latest drug bust, which Walter attends for the experience, Captain Cook apparently adds chilli powder to his meth as a sort of signature, so Hank assumes they are dealing with a Latino: “You exuberant Mexicans!” he says, shaking his head. He then wins a bet with his partner concerning Cook’s heritage: “His first name’s Emilio – that’s at least half a Beaner.”

• After Walter teams up with the real Cook, Jesse Pinkman (a former student), there was a wonderfully observed moment where Walter unloaded the chemistry equipment needed for their meth lab from the boot of his car with all the constructive practicality of the world’s most typical Dad unloading DIY equipment after a trip to B&Q. This chimed nicely with his teacherly insistence that their meth lab was to have an ’emergency eye wash station’.

• Walter, it turns out, can make the best crystal meth ever. “This is art,” whispers a previously sceptical Pinkman. “Actually, it’s just chemistry,” replies the weary Walter.

• The transformation of Walter from quiet, uncomplaining family man to violent, desperate drug manfacturer happens quickly, but was handled believably. As he manfully starts to take control in the bedroom too, wife Skyler gasps, “Walt? Is that you?”

• Very little. The rest of the series has a lot to live up to after this vibrant opening and we wonder whether too much has happened too soon. It will be interesting to see what direction the series takes.

• The characters laughing and sneering at Walter Jr as he tried on new jeans were drawn extremely broadly – the lead who was taken down by Walter seemed to be a naked reincarnation of Biff Tannen.