Confessions of a Sherlock obsessive 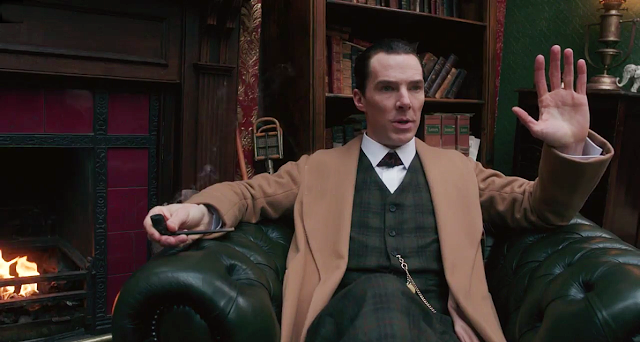 I am a massive Sherlock fan, slightly on the brink of obsessive, and I’m totally not ashamed. I have t-shirts, posters, mugs and even Sherlock Cluedo. I’ve written articles previously for the Radio Times about the show (some of which was quoted in Sherlock: Chronicles, I actually screamed and shed a tear when I saw it) and it’s a topic of conversation that I’m more than willing to discuss on a daily basis. Yes, I’m well and truly Sherlocked. But I know this isn’t the same for everybody and I’m well aware fans of the original few series have been left disappointed and angry with the direction the show is going.

When it comes to the recent special, The Abominable Bride, Twitter was flooded with mixed opinions. While I did enjoy the episode, I can see why others didn’t. It’s clear that this episode, above all others, has been catered purely to keep the fans happy. While still enjoyable to watch it was pretty frustrating to realise that all that had happened to progress the plot was Sherlock had got off the plane and into a car. Still, it was a pretty exciting way to show the short journey between vehicles. Its overnight viewing figures of over 8 million is a testament to the appetite that the public has for the series and the performances from Cumberbatch and Freeman.

What I do miss about the show is the episodes which just involve a single case. There’s a mystery or crime to be solved and that’s exactly what Sherlock and John go and do. It’s what the British public love the most, a whodunnit drama with an added bonus of witty charm. Take A Study in Pink, the very first episode of Sherlock. One simple case; there are a flurry of suspicious suicides which leads to the realisation that there’s a serial killer on the loose. The solution and perpetrator can be guessed when watching the episode, all the clues are there. It’s not confusing and it’s not too farfetched or unbelievable. Same with The Blind Banker and to an extent The Great Game. All had an overall story arch which were flurried with hints of Moriarty’s presence, with his eventual appearance at the end of The Great Game. This was what Sherlock was perfect at doing, never giving the whole game away but instead giving the audience small clues of what was to come.

The Reichenbach Fall is my absolute favourite episode of the show. It’s cool, classy, contains an abundance of clever twists and of course features Sherlock’s most iconic scene. But it’s here on the roof of St Bart’s that the show changed for me. With Moriarty clearly dead, that should have been the end of the storyline. Except for the solution of how Sherlock survived the fall, the whole show was wrapped up there and then and there was absolutely no need to bring Moriarty back. But this is where I feel Steven Moffat and Mark Gatiss underestimated the appeal of Andrew Scott and his portrayal of the character. There’s no denying he’s phenomenal in the role and a much loved addition to the BBC show, even nabbing himself a Best Supporting BAFTA. My feelings are that Sherlock pulled the Reichenbach card too early which consequently caused a bit of a problem for the showrunners. We know that Moriarty died at this point in the original stories and therefore it was safe to assume that this would be the same in the updated version. The surprise reappearance of Moriarty at the end of series three is, in my opinion, an attempt to resurrect a mistake but instead only just produces another one.

My hope for series four is that Moriarty is really dead and instead this is the introduction of another deadly villain, hopefully Sebastian Moran trying to keep his previous employer’s memory alive. Of course there’s already been a Sebastian in the BBC Sherlock canon. Sebastian Wilkes, played by Bertie Carvel, made an appearance way back in the second episode of series one as a banker who employees Sherlock to investigate a break in at the bank. Thanks to Carvel’s recent success (Coalition, Jonathan Strange, Doctor Foster) would it be too absurd a claim to bring the character of Seb Wilkes back in the form of Moran? It’s not impossible, and with a decent enough excuse that I’m sure Moffat and Gatiss could produce (we know Wilkes was never too fond of Sherlock back in their University days) it would be a welcoming twist to series four. Plus I downright refuse to believe that naming Carvel’s character Sebastian is just a coincidence, out of all the names out there they chose one of the most famous in the Sherlock canon? I feel that there has to be a bit more to the character of Sebastian Wilkes.

With filming due to start in April, there’s still little known about the new series. Obviously I and millions others will watch it, but I do hope they manage to bring the magic of the earlier episodes back. If not, well I’ll still enjoy the ride.