The end is in sight as we reach week eight of The Great British Bake Off – the quarter finals. Following Kate’s departure in pastry week the oven gloves were off for advanced dough week. In my hasty note-taking for this review I misnamed it intense dough week, which, it transpired, was more of a premonition that I would realise. Luis, Richard, Martha, Nancy and Chetna are our five disparate bakers set for another three round match in the tent. As we edge nearer to the grand final this series is at its strongest juncture  – it’s the old less housemates in the house analogy. With less bakers, whilst not the main drawer of course, we get a bigger serving of interaction between the bakers, more off-the-cuff moments and a more in-depth insight in the baking process, the panics and the triumphs. And a lot more Mel and Sue behaving worse that your gloriously bonkers Aunts. Musings aside, on with the signature challenge. 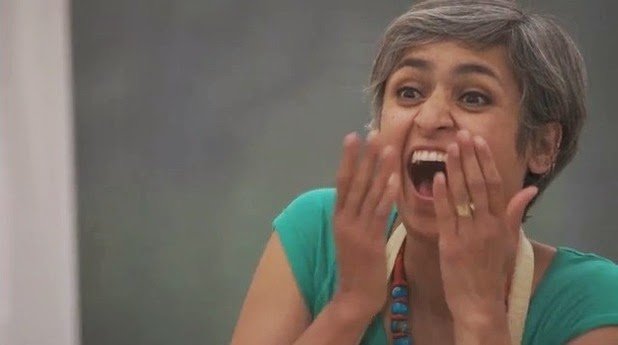 The gaggle were set the task of a sweet fruit loaf. This is an enriched dough bake – heavy on the fats – that needs a slow prove and must be a free form, tin-less, bake. They could choose any filling or flavour and had the staple two and half hours to get rising. This felt to me a bit of a lacklustre task so late in the series but the bakers rose to the challenge with some inventive interpretations of the classic. Luis, once again winning the creativity crown with ease this week with his black forest cherry tree. Shaped as such with lots of small bun ‘leaves’ Mary claimed it ‘looks spectacular’ and Paul ‘very attractive’ but was uncertain of the flavour – Luis having chosen to pepper the dough with cherry brandy soaked sugar cubes. Sue quipped it was comparable to those polio vaccinations of old… was I the only one who spotted the chance for some horse related innuendo? Sweet Martha decided on a spiced plum iced bread swirl that Mary thought ‘tempting.’ Paul was keen on the colour but rapidly ripped it to shreds when cutting in to the loaf. Like a silver quaffed Hercule Poirot he closely dissected the subtle differences in the baked and raw dough. I say subtle, it all looked identical. Still, he thought the flavour a success despite the need for a slower bake. Nancy, as ever a viewing treat and more acerbic and cutting than ever, baked her home-grown Lincolnshire plum braid. ‘Should be quite good…should be very good’ she beamed. In a moment of total rebellion she defied all rules and microwaved her dough to bypass the proving. Microwaving! On Bake Off! The horror. Paul’s signature mix of glee and disapproving was in full force as he predicted a disaster for Nancy. With the resulting loaf the size of a small island Paul was right ‘it’s under proved…all the protein has been damaged’ he glowered. Mary, however, did declare it a rather contradictory ‘absolutely scrumptious.’ Richard fared well with his Swedish fruit tea ring with Paul declaring ‘you’ve nailed that one…well done.’ Despite a lack of height and a very, very wet dough – leave it! – it was another triumph for Rich. Chetna braved it out for this signature with a povitica – an eastern European bake with a Croation date and walnut twist.  Despite a pleasing aesthetic Paul thought it was over-done with cinnamon and Mary wasn’t too hot on the dates but it was a choice that paid-off with Paul declaring it ‘unusual…a very good idea’. 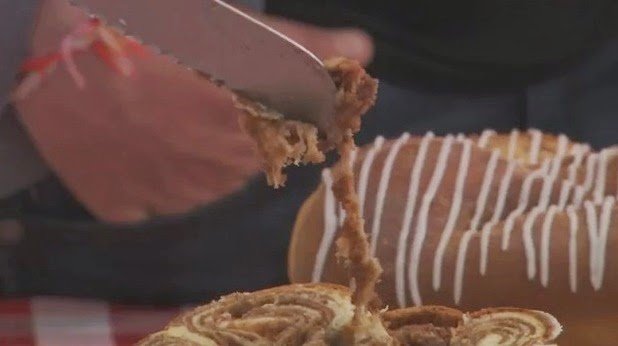 This week’s technical challenge was set by Paul ‘self-confessed king of bread’ Hollywood. The bakers were set a…povitica bake. Yep, the very same signature Chetna had just baked. There was absolutely no hiding her glee and it was a startling change to the crestfallen looks that usually befall every bakers face. The povitica is a cross between bread and pastry and is baked from one long roll of dough with a hidden sweet nut paste. Once folded on itself and baked the nut layers create a swirled, dense loaf. I’ll take no prisoners here, it was a disastrous round. Despite a joyous dough rolling sequence (‘that’s as big as I dare go without ripping it’ ‘I’m going to go as big as I can’) and some spreading issues with the nut paste – envisage spreading cow dung across a field of dough – it was a poor showing for the five. Martha came fifth place with her effort, a loaf that, to put it nicely was raw. Or as Mary pointedly concluded: ‘when you say it is totally raw…it is absolutely raw.’ Martha’s mistake: baking for only half the time needed. Nancy, not impressed with this challenge (it’s a funny little thing’) decided to use the microwave yet again and didn’t fare much better than her signature. Another victim of under-baking Paul chastised the differing thickness of the layers and irregular filling but declared it ‘ultimately a raw dough’. She scraped in a generous third place. Luis’ nuts received warm appreciation this week from Mary, who declared they ‘had a nice crunch’. Despite his rise being stunted and his filling doughy the overall effort secured him second place. It was no surprise, and much to her joy and relief, that Chetna won the first prize place. Not before Paul channel his inner Hercule Poirot once again examining the insides of her loaf with far too much glee. ‘It looks…very good’ he declared, with a poorly hidden disappointment in his voice. ‘Not bad at all’ he concluded.

This week’s showstopper really elevated a week of moderately bland bakes. Doughnuts! As someone who was once fed these for breakfast at a summer camp in America, this was a mouth-watering, lip-smacking treat for the week eight finale. The bakers were tasked with two set of eighteen different types of doughnuts and devised some brilliant twists on the bakery classic. Nancy’s doughnut family tree – an actual tree of hanging doughnuts – feature ‘adult’ (not like that) limoncello with flaked almond doughnuts and child friendly milk chocolate coated rings complete with blue-eyed Hollywood lookalikes. Terrifying…truly terrifying. Mary declared the limoncello in the adult offering as ‘absolutely lovely’ but Paul criticised the irregular colour and dry insides. ‘Your good at your flavours but you’ve let it down with the proving and baking’ he surmised. Richard’s fairground inspired offerings were a real treat –  rhubarb and custard and toffee apple doughnuts. Despite his caramel having dribbled in to his carefully crafted orange crate display Mary praised ‘I like that a lot, you’ve cracked it with Paul offering the ultimate praise ‘that’s very professional doughnut.’ Richard, rightly, was one happy chappy. It fell once again to Luis to offer up the most creative, downright camp, doughnut offering. His cocktail inspired batches were a set of mudslide doughnuts topped with a Baileys-filled straw and raspberry and mint jam presented in cocktail glasses of course. The weeks of taste-testing have clearly taken their toll on Mary, who took one sip of the Baileys and looked like she’d downed eighteen Jaeger bombs. Paul was quick to kill the party ‘you haven’t really got a doughnut – you’ve got a coffee bomb with alcohol’ he chastised. However he was in full praise for the mojito batch praising the consistency of the bake and the ‘lovely shape and icing.’ Martha’s rather restrained lemon and poppy seed glazed ring and chocolate and passion fruit doughnuts were an unsuccessful bake too far for her with Paul exposing the airholes in the poppy seed rings, a result of over-proving.  Despite enjoying the taste of both ‘the textures and the look are all wrong’ thought Paul and it was this denouement that sealed Martha’s fate as we waved goodbye to the seventeen year old baker. As I predicted last week it seems the pressure might just have been a bit too much, but, clearly a firm favourite with all the gang it was a fittingly proud exit for her. With Richard being crowned star baker for an unprecedented fourth time (a show record!) it was left to Paul to succinctly set us up for the final two weeks of Bake Off ‘anyone of those four people in that tent could win…’ 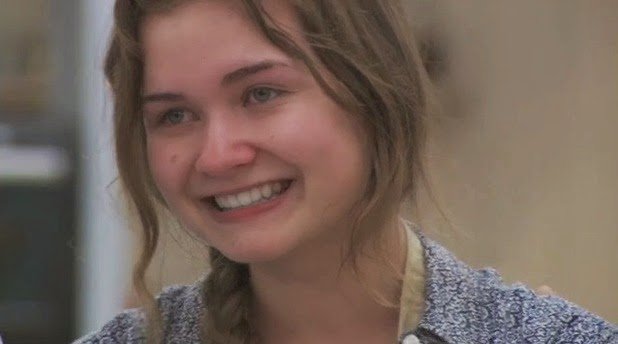 I’m still sitting on the fence over her, it’s Chetna, does she really deserve to still be there?!

It’s Luis. What a guy. Any man that can invent mojito doughnuts deserves the plaudit.

Mel on Luis lengthy loaf: ‘that is one hell of a snake’

I love her, but the rebellious Nancy is beginning to lose form.

The Great British Bake Off Continues Wednesday at 8.00pm on BBC ONE.

Read our Review of Week 7