Seasoned viewers of period drama will be well aware that the past is a foreign country and that folk do things differently there. Even so, The Great (currently in its second season on Channel 4) is that little bit more different. The exuberant comedy-drama on the rise of Russian Empress Catherine the Great has the kind of arm’s-length relationship with historical truth that Blackadder had when depicting the court of Eliza-beth I. While it may not be as celebrated as Versailles, Wolf Hall or The White Queen, The Great has carved out a niche for itself as the class joker problem child of the royal period drama. The anarchic goings-on in St Petersburg’s Winter Pal-ace as Catherine shows up are not for the faint of heart.

Pity poor Catherine (Elle Fanning) then who arrives in Russia a naïve 18-year-old with dreams of completing her arranged marriage to her Prince Charming. Her betrothed Peter III (Nicholas Hoult) however is a belligerent oaf, more likely to be hunting quail and chasing tail than ruling the country. Cruel, dimwitted and mystifyingly confident he is a study in bloodline privilege. A horrified Catherine must learn fast. The royal court, she quickly discovers, is a New Gomorrah of sex, booze and summary violence. At the other end of the morality spectrum, the pious Archbishop Archie (Adam Godley) menaces with the views of the Orthodox Church. 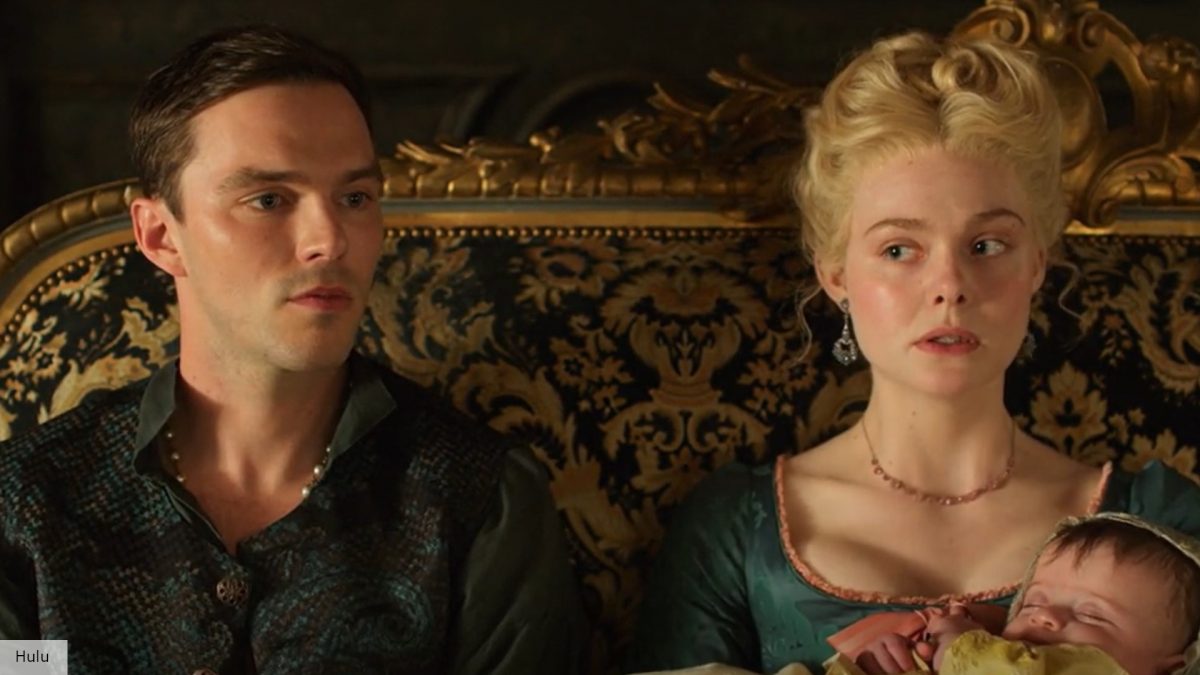 Worse still are the ladies of the Russian court. These Baltic mean girls are as ruthless as any Cossack battalion on the tear and they don’t take well to the German outsider stealing Russia’s most eligible bachelor. They quickly start a rumour that Catherine had sexual relations with a horse, defaming the virgin empress with a smear still discussed today. With tyrant husband to the left and scandalising attack dogs to the right, Catherine is faced with a stark choice: adapt or die.

So adapt she does, forging key alliances with scrappy maid Marial (Phoebe Fox), timid bureaucrat Orlo (Sacha Dhawan), lecherous general Velementov (Douglas Hodge) and her royally-appointed lover Leo (Sebastian de Souza). They all agree that the loose cannon Peter needs removing but the complex dynamics of 18th-century Russian power structures need the heart of a berserker and the mind of a grandmaster to unravel. Season one sees a daring plan unfurl as Catherine’s small crew of plotters aim to change the course of Russian history forever. A mixture of pluck, serendipity and magic brings Catherine to the very cusp of power by the end of season one. The little girl grew up fast. Gillian Anderson puts in a guest appearance as Catherine’s scheming mother in a run of episodes in the perfect season.

Season two finds Catherine as the new Empress, Peter under house arrest and the fortunes of our heroes transformed for the better. It’s lonely at the top though and the big job brings big problems. Catherine now rules a transcontinental empire riddled with conflicts and contradictions, in desperate need of modernisation. Archbishop Archie continues to be a thorn in her side, Peter lingers as an unwelcome backseat driver and a burgeoning conflict with the Ottoman Empire threatens the fragile stability of her reign. No one gets handled the title the Great – you have to earn it. 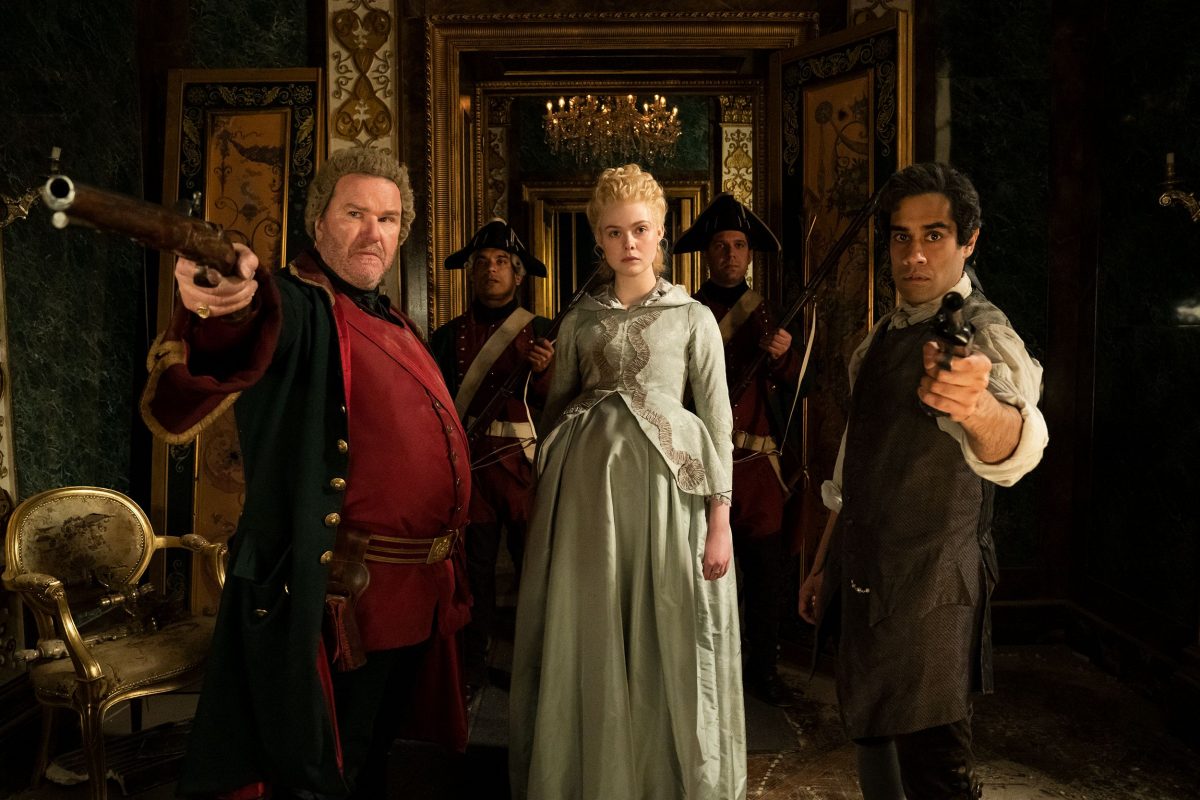 Not that it matters at all. The Great does a terrific job of having its cake and eating it. It provides all the intrigue and grandeur we love in period drama while still giving us a riotous good time. In Elle Fanning’s Catherine, we have a worthy heroine – a feminist icon who takes over a dumpster fire of a country and reshapes it in her own image. Nicholas Hoult likewise offers us a great antagonist in Peter, imbuing him with just enough sympathetic qualities for us to want him to stick around. Hoult’s comedic chops are proudly on display, his aristocratic looks a big bonus in playing the entitled schmuck, the son of a fearsome patriarch he can never hope to emulate. Peter carries the name of his father like a giant burden. Russia goes from Peter the Great to Peter the Great disappointment. While he repeats the orthodoxy that he was chosen by God it raises the question “chosen for what?” Because for the most part, the Almighty seems to have cast Peter as the comic relief in a cosmic drama where his pratfalls and humiliations are the only reasons for keeping him alive.

Beneath the silliness, swearing and sex the series makes serious points. Season two begins with a heavily pregnant Catherine. Pregnancies at this time would regularly end in the death of a mother and her child. A poignant scene sees Peter dig graves for his wife and his heir in the event of their deaths. Elle Fanning and Nicholas Hoult were brilliant in the first season but they are even stronger in the more confident second season. Hoult goes through quite the transformation. He’s Still very much the buffoon who thinks everything he does and says should be applauded or obeyed, the realisations he comes to throughout the series see him fundamentally change. Hoult has always been able to make this difficult character feel grounded and strangely sympathetic but the Peter who ends the second season is a better person.

It’s also interesting to see Catherine struggle with the power she was so desperate for in the first season. When she decides to free the ‘serfs’ (servants who work in the palace) the whole place is thrown into chaos resulting in death. It’s not a world accepting of change and Fanning deals with Catherine’s disappointments skilfully. The poignancy can often catch you off-guard but it’s what elevates the show into something special.

It’s all a triumph for creator Tony McNamara who based the show on his 2008 stage play Catherine the Great. If you find the modern-day argot in historic settings familiar that could be because McNamara co-wrote The Favourite with Deborah Davis. Humanising historical figures is one of the first jobs of historical drama and making them sound like us is a neat device towards that end. As in The Death of Stalin and Chornobyl, the accents are English. You may feel at any moment that you have stumbled into a Georgian The Crown prequel. Court intrigue is universal after all.

And The Great has universal appeal. So the next time you’re wondering which historical drama to binge consider giving a chance to the intrepid fräulein who took on an empire and made it her own. You could do a lot worse.