Before The Shawshank Redemption came Porridge and it would be hard to argue against the case that both qualify as the classic screen tales of prison life. 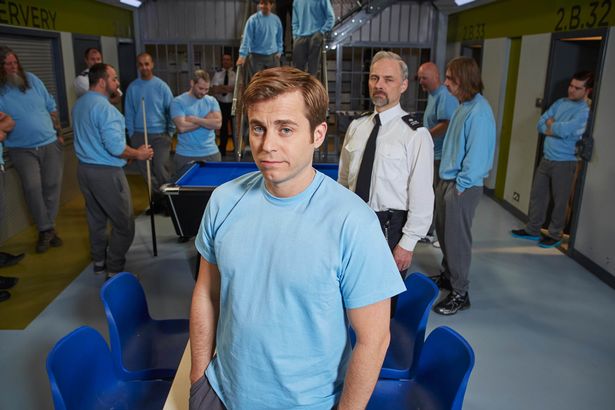 Porridge, in our house was the catechism – we could recite the script of, say, A Quiet Night In word perfectly, and I venerated its creators, Dick Clement and Ian La Frenais (along with Clive James in his Observer TV column), as the nonpareil of their respective fields of writing.

And its star, Ronnie Barker, no mean wordsmith himself, was one of our finest comedy actors, as the recent reruns on UKTV channels prove.

So I approached the lads’ updating of Porridge in the hope that my heroes proved not to have feet of clay. 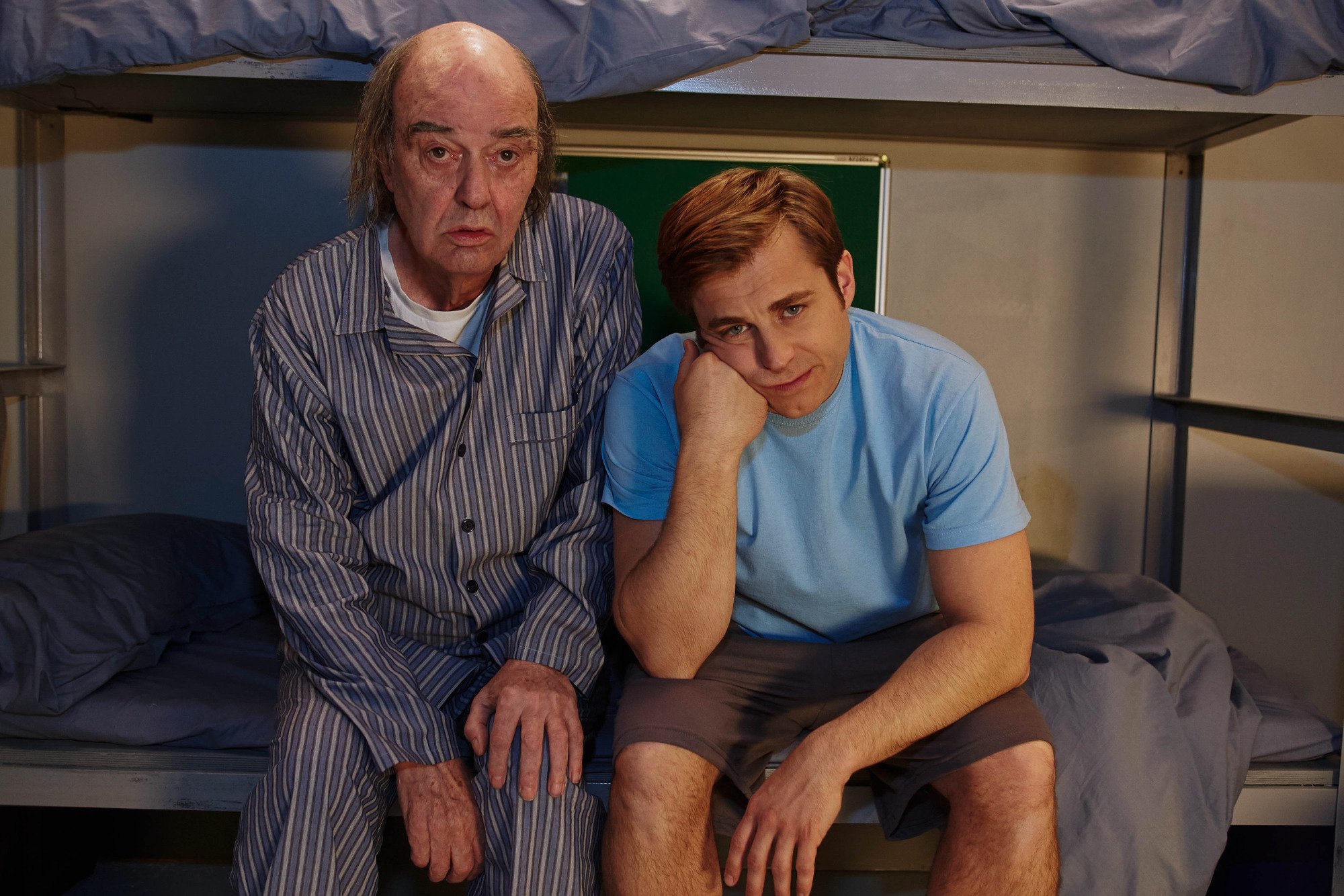 Apeing the original opening, Fletch’s grandson Nigel (Kevin Bishop) gets sentenced to five years’ incarceration. Although in this post-2008 financial meltdown age of cybercrime he’s a black-hat hacker rather than a burglar like his late grand-dad. He’s not kidding us that he’s a ‘freedom fighter’ like Edward Snowdon or Julian Assange – this was £48,000 worth of pure fraud through bogus charities such as “Orphans in Mali – er, Bali” as he tells the judge.

There are no forbidding Victorian walls at C-class Wakeley Prison – it’s all gymnasiums and TV in the cells (don’t tell the Daily Mail). It even has a nice female governor (Pippa Haywood), therapy sessions to help Young Fletch with his (non-existent) OCD, an illustrious Fletch dodge to pick up a mobile stashed under a chair.

But do they really still serve porridge in stir? 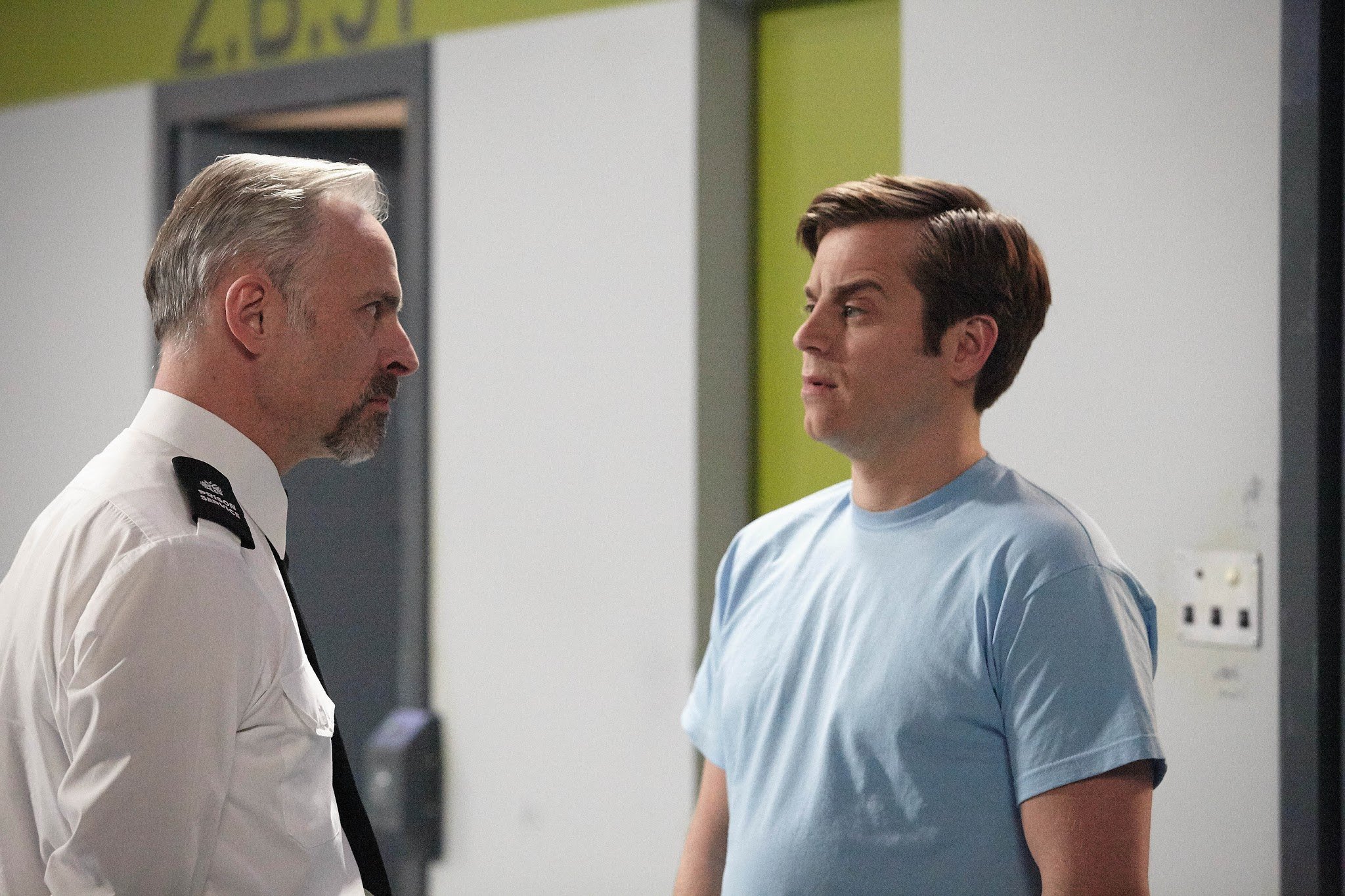 Like his grandfather before him, Fletch seems to be cock of the walk, doling out bons mots to other inmates, concealing his inner steel, a survival instinct that served Old Fletch so well. And he needs it as Peter Vaughan’s ‘genial Harry Grout’ has morphed into thuggish Richie Weeks (the impressively pecc’ed Ralph Ineson), who is straight out of a Guy Ritchie movie. Diss his trainers and it gets violent – like Grouty, he has staff (Ricky Grover) to do that. He too, is inside for white-collar crime “scamming VAT on a cellphone fiddle” and awaiting a parole hearing. But Weeks’s family members are kingpins of Manchester’s underworld whose exploits are, of course, recounted on Wikipedia, and his chances of probation are being threatened by ‘malicious’ emails from rival gangs. Could Nigel doctor his file on the Ministry of Justice computer system? It isn’t a request.

Young Fletch’s slip-up with Windows XP during a hack with the smartphone into the prison server compromises the automatic fire alarm in the middle of the night and when none of the Home Office’s tech geeks can fix the problem, the governor calls him in as troubleshooter. So that’s Weeks’s record sanitised and as a bonus he implicates Meekie’s terminal as the origin of the hack – 40 years on, Fletch is still metaphorically stealing McKay’s apple.

But as he now knows that the system password is Porridge, one hopes the governor is going to change it if this goes to a series (as is rumoured).

Bishop’s Young Fletch has grand-dad’s swagger and seems to be trying to ape Barker’s speech patterns – even for a performer as clever as Bishop that is a stretch, however, there is a nice physical bit of business that evokes Old Fletch as the younger, far more limber version has several goes at trying to get onto his top bunk – because top bunk’s status in the nick, innit?

When Dave Hill turns up as 76-year-old Joe Lotterby (a lovely nod to Sydney Lotterby, producer-director of the original series), disgruntled Fletch ticks off his litany of pet hates to vet his new cellmate, checking for prostate trouble rather than intolerably sweaty feet. Lotterby, who served time with Old Fletch in Slade 40 years ago, does at least elicit heartwarming closure on Fletch and Lennie Godber’s story – thanks for that, boys.

There is some uncomfortable shoehorning of references from the previous iteration. Dad is Old Fletch’s son Raymond (Martin Trenaman) and they have a short conversation mirroring grand-dad’s visiting-day conversations with daughter Ingrid. It feels tacked on, but some exposition should be expected in the establishing episode of a refreshed series. What it does promise is an appeal for younger viewers and older viewers could be brought round as well. So it has legs, but I am withholding further judgement. 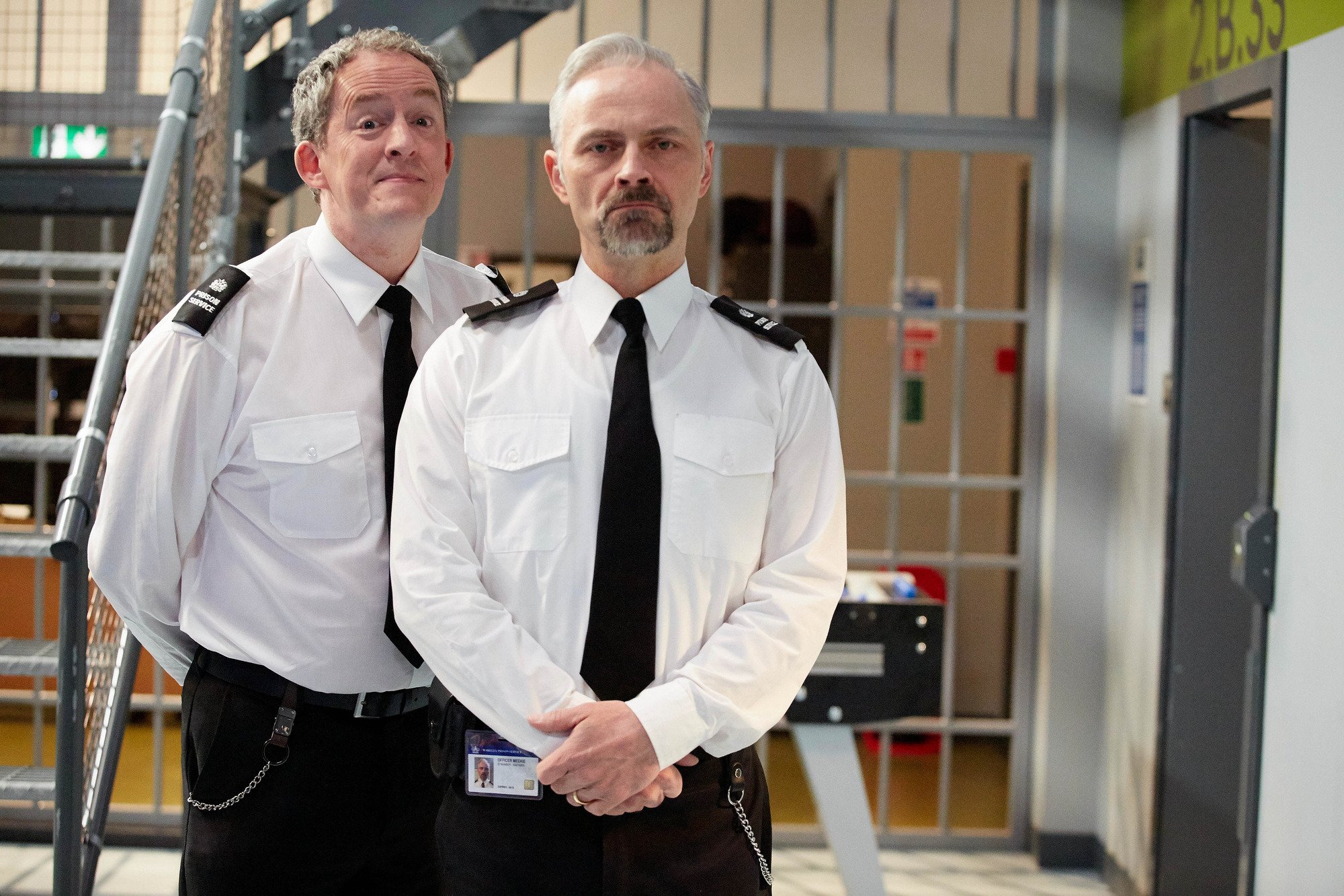 The relationships the characters had in the 1970s iteration were believable because the smaller Victorian jails lent themselves to that kind of intimacy between prisoner and jailer. But this is surely defunct now that massive modern jails are run by Serco and G4S, using outsourced labour rather than prison service ‘lifers’ like Barrowclough and McKay, who could at least look forward to a nice safe government pension.

Sepp Blatter is so yesterday’s man that a discussion about whether he’s having porridge or muesli “in a mint nick in The Alps” already seems old hat, as are several other strangely rather dated references. Viagra, “stanky leg or cut a daddy”? That’s so Noughties.

Drones, which ‘don’t come cheap’ as Weeks reminds us, bringing in phones drugs and other contraband are, however, fortuitously in the headlines. And it was heartening to see the reference to a stolen tin of pineapple – a McGuffin from the original series. 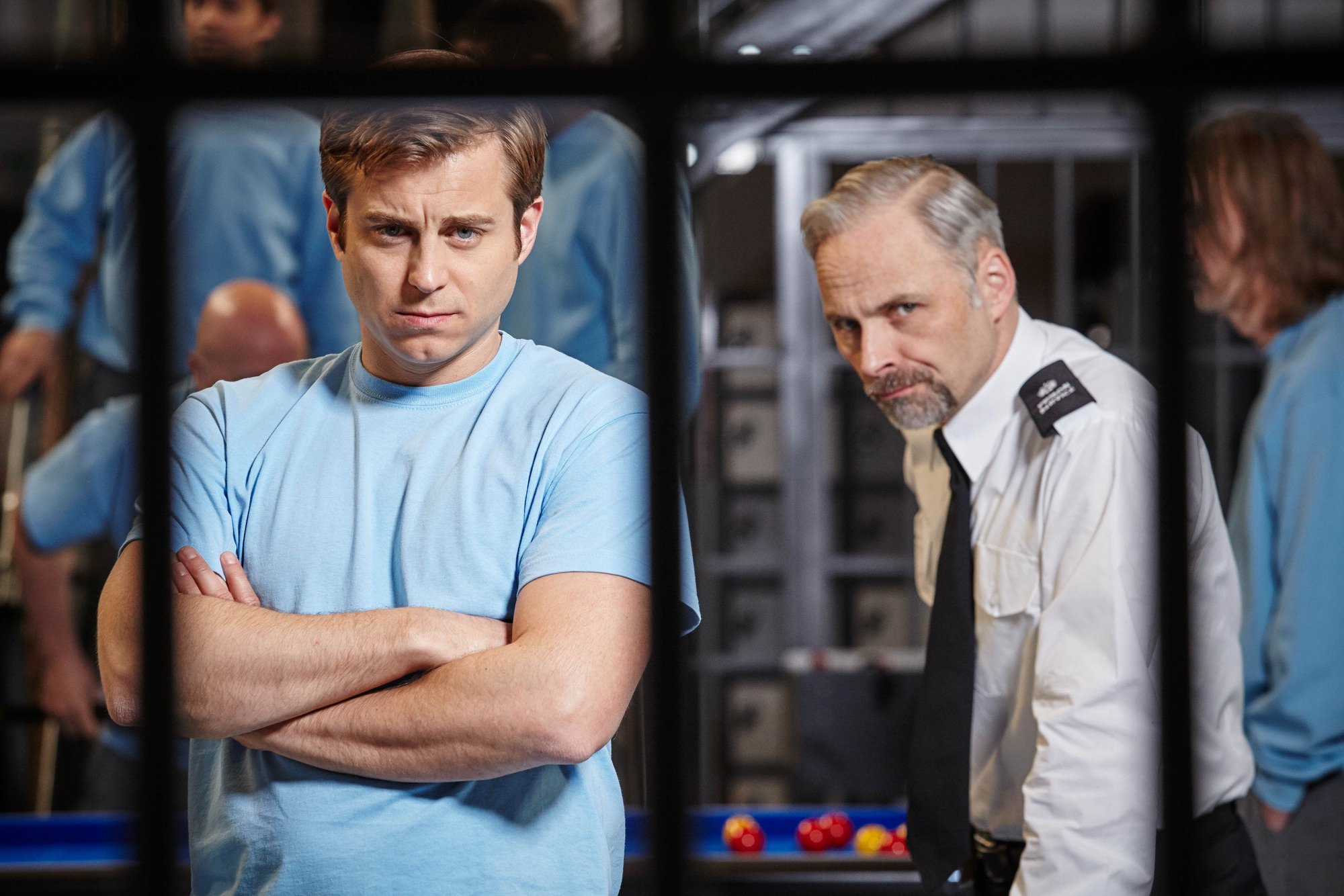 Because a modern audience seems to expect short scenes, the dialogue is fast-flowing. The language, though, contained several gorgeous refrains from old Porridge – and Clement and La Frenais’ Whatever Happened To The Likely Lads for that matter – “prone to melancholy”, “little victories” swept away the years.

But the depth of the night-time conversations between Old Fletch and Godber, in particular, to a great extent laid in what was not said. When Richard Beckinsale’s Godber asks: ‘Fletch, are you awake?’ Barker – after a beat – replies ‘No’. A whole world of pain existed within that silence, and this was missing.

Occasionally, as Ronan Keating sagely sang, and great comedy often exemplifies this, you say it best when you say nothing at all.