Looking up into a Gleeful Sky

It’s not easy being a Gleek… mocking aside, fans now need to ensure they’ve got a Sky subscription as Murdoch’s empire has got its claws into yet another hit show pinched from E4. 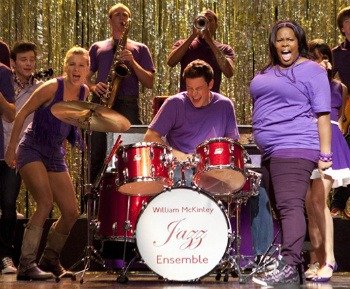 We started the senior year with a focus on what could be a natural end to the show: graduation. Not too much has changed, but we have said goodbye to ‘Trouty Mouth’ Sam, Zizes has decided that last season’s Rachel/Finn on-stage kiss killed the cool of the club and Quinn has gone all eighties-skank-chic, shunning the clean-cut image of Glee. I can almost guarantee it won’t last, given a few clandestine shots of her watching them perform on stage.

However, not all is lost: there’s new blood on the scene in the form of ‘Sugar’ who’s ‘Apergers’ and not afraid to show it. I’m unconvinced by Glee’s foray into showing disabled characters: Artie, ostensibly wheelchair bound is actually not a disabled actor, a fact that was unknown to me until last season when he jumped and frolicked around a shopping mall in a dream sequence that felt misjudged and uncomfortable in equal measure. Becky, however, is another story: her story and role in the Cheerios as Sue’s left hand woman is dealt with sensitively, but Sugar seems to be a contrived effort to bring humour to a so-far unmentioned area of disability in the show: Aspergers and Autism Spectrum disorders. I felt certain that I wouldn’t be the only one who would be unimpressed with Glee’s ‘self-diagnosed’ Aspie, who asserted that she could ‘say whatever she wants’ because of her illness. As someone who has worked with those on the ASD spectrum, I found it somewhat disrespectful and completely at odds with the way that people affected actually experience the social world around them.

I was also surprised to realise that Glee, so far, has not addressed the idea that not all Ohioan teenagers can sing: you’d think that, with the popularity of American Idol, American’s Got Talent and all the associated ‘talent’ shows that grip the world in their exploitation of the tone deaf, Glee would have taken an early opportunity to take advantage of this potential comedy gold mine.

Anyway, back to Glee. What I really love about Glee and what keeps me watching is the guilty pleasure of watching incredibly talented singers and dancers make their way through some fantastic show tunes. It’s saccharine and unrealistic, it’s twee and auto tuned, but watching Lea Michelle (Rachel) and Chris Colfer (Kurt) sing ‘Ding Dong The Witch Is Dead’ managed to melt away all my troubles and makes my heart soar. Storyline, glitter attacks and purple pianos aside, I can’t help but feel glad that Glee is back.