When people talk about the satire of even the recent past, the most common response is that today, it wouldn’t even pass as satire. Since The Thick of It aired its first season, some of the jokes in those early episodes actually became government policies, and fictional Secretary of State Hugh Abbott hiding in a cupboard came kicking and screaming into the real world when Ken Livingstone tried to seek sanctuary from the press in a toilet cubicle. 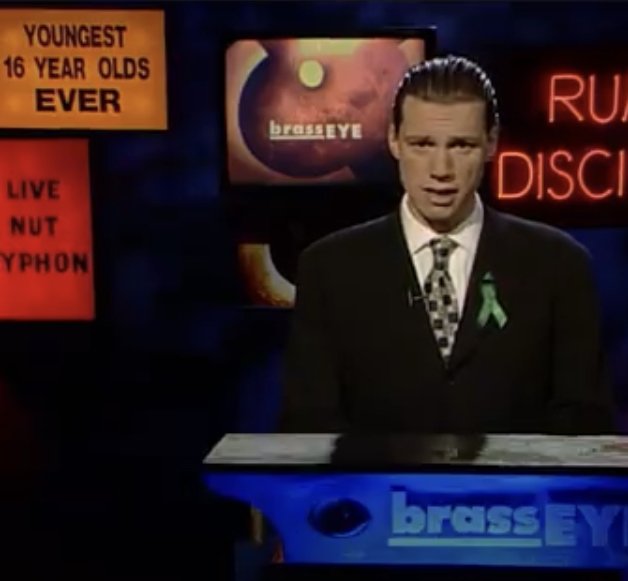 With the world getting increasingly surreal, and satire straining to keep up, the more extreme edges of the genre have become full of signs of how the news and political landscapes have become so strange that they’ve ended up being beyond parody. The irony – the kind of irony that wouldn’t feel out of place in satire – is that the extremity of politics and sensationalist news that once parodied, has become reality. And one of the most morbidly accurate predictors of that reality was Chris Morris’ 1997 series Brass Eye. The formula for what would eventually become Brass Eye was first developed in the show that Morris created a few years earlier: The Day Today (1994). And while the real legacy of that show is the creation of Alan Partridge, its creation of a bizarre news desk at once struggling to keep up with a strange world, and making it stranger, also feels like an early run at the ideas that would be at the heart of Brass Eye three years later. From the repurposing of actual news footage into something bizarre to an obsession with the intersection between TV platforms and morbidity, The Day Today clearly has major institutions in its sights. Even in the very first episode, when footage of Prince Charles giving a press conference uses archive footage in order to make the case that he’s planning on staying in a prison; the sequence has a news broadcaster say that the Prince wanted to “set an example” for the British public, before cutting to the man himself at a press conference, saying “I wanted to set an example.”

The first episode of The Day Today also contains a sequence that could arguably now contain both this show, and its darker successor: Changing Attitudes Nights. Offering viewers the chance to savour “Britain’s last televised hanging,” to shows that wouldn’t be acceptable today, which included a parody of racist sitcoms, in the fictional Them Over There, and the even darker Kiddystare that seemed to predate the infamous Brass Eye “Paedo-geddon” special.

Looking back, there’s always a temptation to say that they somehow managed to predict the future – something that inevitably happens every time an off-hand gag from The Simpsons somehow makes its way into reality – and Morris’ shows also get this treatment. The most famous thing about Brass Eye is the way it took nonsense stories and had real celebrities discuss and endorse them as if they were real stories, from Karla the elephant and the drug Cake, to a bizarre discussion with Peter Tatchell about politicians coming out as gay (or coming out even if they aren’t). And while a line can be drawn from Cake to “alternative facts,” rather than predicting misinformation, the show instead seemed to expose a fundamental truth about news media: people would be – and often still are – more than happy to lend their name in exchange for a bit of airtime.

That’s what feels most striking about the series looking back on it now; not so much the idea that it predicted the future, or about the relationship it has to fake news, but instead, the ways in which it exposed an approach to news and punditry that’s only become more prevalent. From the outcry to its infamous series two special reinforcing the very things that the show set out to critique, to an approach to covering serious issues that have become increasingly inane, Brass Eye didn’t predict the future so much as it revealed uncomfortable truths about the present.

Brass Eye was at its best when it took the absurd and made it normal.  It excelled at taking the malicious and making it feel every day. In an episode devoted to sex, there’s a scene in which Morris chastises someone for having what he calls, “bad AIDS,” in contrast to “good AIDS,” wherein someone gets the disease through “no fault of their own,” complete with a green ribbon (as opposed to the red one associated with World AIDS Day). The aggression in this segment – from both Morris and his studio audience – feels not only like only a small exaggeration for a country still in the shadow of Section 28, but incredibly revealing as, across the Atlantic, the US engages in its own version of this legislation with the Don’t Say Gay bill. The dark irony of Brass Eye is that, rather than predicting the future, it simply shows how little we’ve changed in the decades since the show first aired. 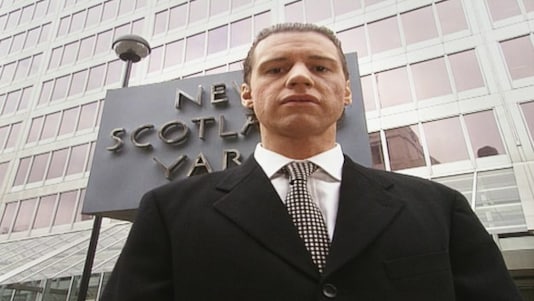 It’s at its most profound, hilarious, and unsettling when it exposes the cracks that have always been there and always will. As punditry becomes more extreme – and partisan – Morris’ stinging delivery feels strangely palatable. Brass Eye, like a lot of satire, wasn’t about predicting the future, but instead about exploiting the truths lurking beneath the surface in the real world; for The Thick of It, that meant the vanity of politicians and the absurdity of the rituals of their professional lives in the public eye; for Morris, it meant news broadcasting that cared less about the news, and more about sensationalism, sowing disagreement and amplifying divides. If Brass Eye predicted anything, then it’s the endless and nonsensical “culture wars” that are endlessly rearing their heads across politics and punditry. Throughout its surreal reconstructions and preconstructions, or playing the morbid dead straight in ‘Paedo-geddon,’ Morris argues that “we have become a people confused.” Brass Eye might not have been born in that confusion, and it certainly didn’t predict it. As time has gone on, the cultural shifts that have kept Brass Eye relevant seem seismic and minor all at once; a slow crawl towards Morris’ absurd view of our not-quite world becoming all-too-real.

Brass Eye is available on All4.

Sam is a writer, artist, and one of the founding editors of Third Way Press; they have contributed to Little White Lies, Neotext, Digital Spy, and other places. They are the author of All my teachers died of AIDS (Pilot Press), and the forthcoming Long live the new flesh (Polari Press).