I read Sally Rooney’s 2018 novel Normal People last year and it quickly became one of my favourites. It tracks the complexities of the relationship between Irish teenagers Marianne and Connell, as they come of age and drift in and out of each other’s lives. I loved getting to know these characters, as well as the beauty of Rooney’s writing – which is why I was slightly apprehensive when a TV adaptation was announced by BBC Three. However, having watched the first two episodes, I know that fans of the novel will not be disappointed.

The book has been adapted by Rooney herself, as well as writers Alice Birch and Mark O’Rowe, into a 12-part drama for BBC Three in partnership with Hulu.

The series, which is all available on the BBC iPlayer and will be shown in double bills on BBC One,  is set in a small town in the west of Ireland and follows students Connell (newcomer Paul Mescal) and Marianne (Daisy Edgar-Jones). Connell is popular within his school year group – although more reserved than the others in his gang of friends – talented at football and very intelligent. Marianne is very much an outsider in school, she is extremely smart yet she can come across as intimidating and always has a sharp remark ready for a scolding teacher or those who make fun of her. Their paths cross when Connell’s mother works as a cleaner at Marianne’s house, and as a connection grows between them, the pair begin meeting, and having sex, in secret. Normal People is very much character-driven, with a vast reliance on its two leads, but the show’s creators have done incredibly well in taking Rooney’s intricate characters from the page and bringing them to life. Daisy Edgar-Jones is, in my opinion, the perfect Marianne and is exactly how I had imagined her in my reading of the novel. I was familiar with her performance as Karen and David’s daughter Olivia in Cold Feet over the last few years, but she really comes into her own and the series gives her the chance to shine. People. Edgar-Jones manages to highlight the conflict between Marianne’s innocent vulnerability and her fierce strength, which is truly fascinating to watch.

The subdued performance from Paul Mescal gives the character of Connell a brilliant natural quality. He is likeable; shy, kind, and a secret bookworm. He struggles with his identity and to decide what he wants, often succumbing to peer pressure and the maintaining of his social reputation. Your heart breaks for Marianne as Connell ignores her texts, blanks her in school and simply watches as his friends bully and laugh at her – but despite this, you never despise Connell for it, which is a testament to Mescal’s performance, and you feel the character’s inner turmoil.

The relationship between Marianne and Connell feels very genuine, and Edgar-Jones and Mescal have a natural chemistry that is convincing and never feels contrived. Within the first two episodes, there are a number of sex scenes and, in the best possible way, they are presented as clumsy and awkward, although they are not necessarily played for laughs, which is so important. The scenes are explicit and extended with extensive nudity, but it is always tasteful; there is never an attempt to be overtly sexual, the delicate scenes are there to showcase the intimacy between the young lovers.

Often in TV, scenes like this feel forced and are perhaps included within shows unnecessarily, but in Normal People, sex is almost a form of communication for the characters and is crucial to their relationship. Scenes like this can also feel uncomfortable to watch, but here they feel safe and beautiful – something which is reinforced by Connell waiting for explicit consent from Marianne and continuing to ask if she is okay throughout. The care that has been taken in putting together a particularly long sex scene in the second is like nothing I have seen on television before.

The idea of adapting the book into twelve half-hour episodes may seem a strange one, but it’s yet another thing that works in the show’s favour.  The pace is slow but this is a story that needs to be told slowly. Often the best moments from an episode are those that are free of dialogue where directors Lenny Abrahamson and Hettie Macdonald linger on a look from the characters or turn up the sound so that the audience can hear Marrianne’s shallow breath. The clever use of silence within a scene feel deliberate and poingent.  The pauses, although sometimes awkward, are realistic and reflective of the pensive nature of the couple at its centre. Those familiar with the novel will know that it is split into small sections, a period of minutes, days, weeks or months passing between each one, therefore the fragmented format is perhaps faithful to Rooney’s original structure. I think the slow pace may put people off but I think it is necessary, to give each section enough time, and to allow the audience to connect with Marianne and Connell – both as individuals and as a couple.

I found it unsurprising that Sally Rooney played a major role in the adaptation of Normal People, as I think that the series is incredibly faithful to the novel. For example, when I read the book, I remember experiencing a brief sense of disorientation, and this feeling appears to have been replicated in the show’s opening scenes, as we establish the relationship between the main characters, as well as their economic and social statuses. The specific Sligo accents feel extremely authentic, with particular credit to London born Edgar-Jones, who never stands out from a mainly Irish cast. Much of the dialogue itself is taken directly from the novel or is at least paraphrased. Although most of the characters’ inner thoughts and feelings, that are able to be made explicit in the book, aren’t vocalised in the adaptation, it isn’t needed as the performances tell us everything we need to know.

Made for BBC Three, Normal People probably wasn’t meant to be shown in primetime on BBC One. However, the current circumstances mean that as well as the boxset being available from 26th April, episodes will air on the channel every Monday night. It will enable the series to reach a much wider audience, and deservedly so. Although the central characters are teenagers, this is not a childish show, nor is anything sugar-coated or simplified for a younger audience. The novel, at least, is set from 2011 to 2015, but there are no particular pop culture references, and the story itself is somewhat timeless. The primary coming of age narrative is universal and something that everyone can identify with, and feelings of reminiscence and nostalgia could help to give Normal People more of a mass appeal.

Normal People is, at its heart, a love story, but it addresses love in a complex and messy way that has remained relatively untapped within television, with important undertones of class and status that give the show an added depth. It’s quiet, raw and tender, and whilst I’m pretty sure that those who enjoyed the book will be pleased with its adaptation on the small screen, anyone unfamiliar with Marianne and Connell’s story will warm to them just as much.

Normal People is available in its entirety from Sunday 26th April or from 9pm on Monday 27th on BBC One. 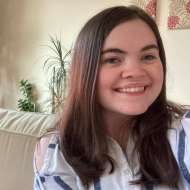