If you thought you’d had it with a worldwide deadly disease then Station Eleven is keen to prove you wrong. StarzPlay’s adaptation of Emily St. John Mandel’s 2014 novel places us front and centre in a world where 99% of the Earth’s population have been wiped out by a lethal flu outbreak. It threads together multiple timelines, mainly the immediate aftermath of the pandemic and 20 years down the road. The post-pandemic world is seen from the perspective of the Traveling Symphony, a touring collective of musicians and actors who perform Shakespeare in a punishing year-round circuit of settlements formed around Lake Michigan they call “The Wheel”. The community may be stuck in a travelling minstrel Groundhog Day in perpetual am-dram turmoil but it beats the hell out of being dead.

Our hero is Kirsten Raymonde (Halt and Catch Fire’s Mackenzie Davis) who we first see as an eight-year-old girl orphaned as the pandemic strikes and later as the Traveling Symphony’s star actress. She’s a battle-hardened survivor with the unmistakable edge of someone you really wouldn’t want to cross. The Symphony are the only family she’s known for two decades and she’s fiercely protective of them. In the stateless wilderness of what was once the United States, it’s life without a safety net and members of the Symphony tread carefully on The Wheel, seldom straying from the path. 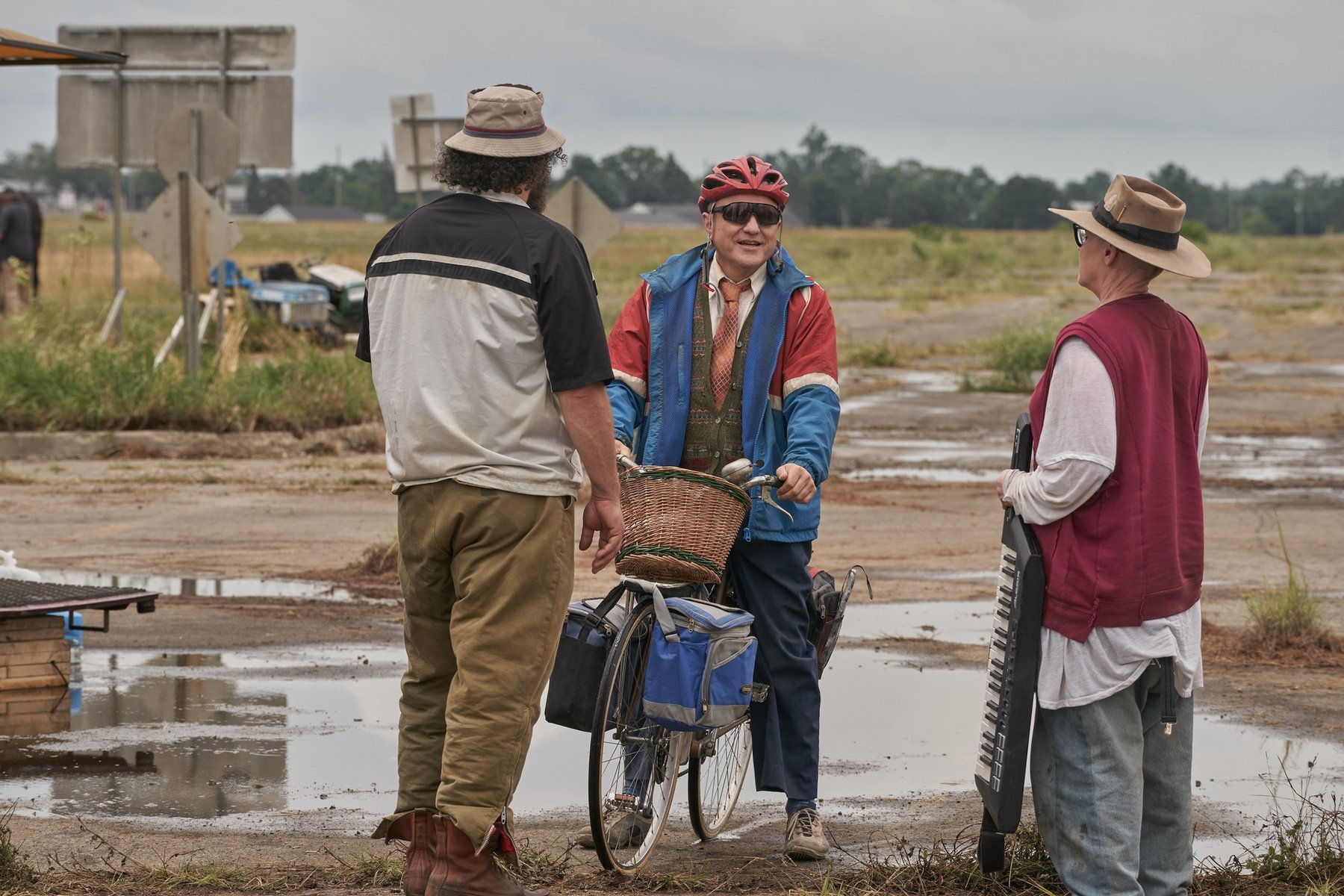 Because in the grand tradition of the apocalypse they are paranoid and someone is out to get them. A mysterious guru known as The Prophet lurks. Part Charles Manson, part child catcher The Prophet (Daniel Zovatto) lures children into his cult with a seductive message: only those born after the pandemic (post-pans) are pure. The Pre-pans who survive the apocalypse should never have done so. If you’re over 20, you’re a waste of air. The pre-pans are the hated one percent.

The Prophet’s grisly theology is inspired by a comic book, the titular Station Eleven where a stranded spaceman called Doctor Eleven encounters a population of children (the Undersea) orphaned by a flood on a space station. The Prophet takes his cue from the comic book to raise an insurgency of child soldiers to fulfil the book’s mysterious prophecy. Station Eleven is the cult’s sacred text, its holiest relic. For Kirsten, it’s her childhood companion, a magical tale she can recite by heart. That a barely known graphic novel can have such resonance in the New World is a testament to both the power of art and the arbitrary nature of belief. 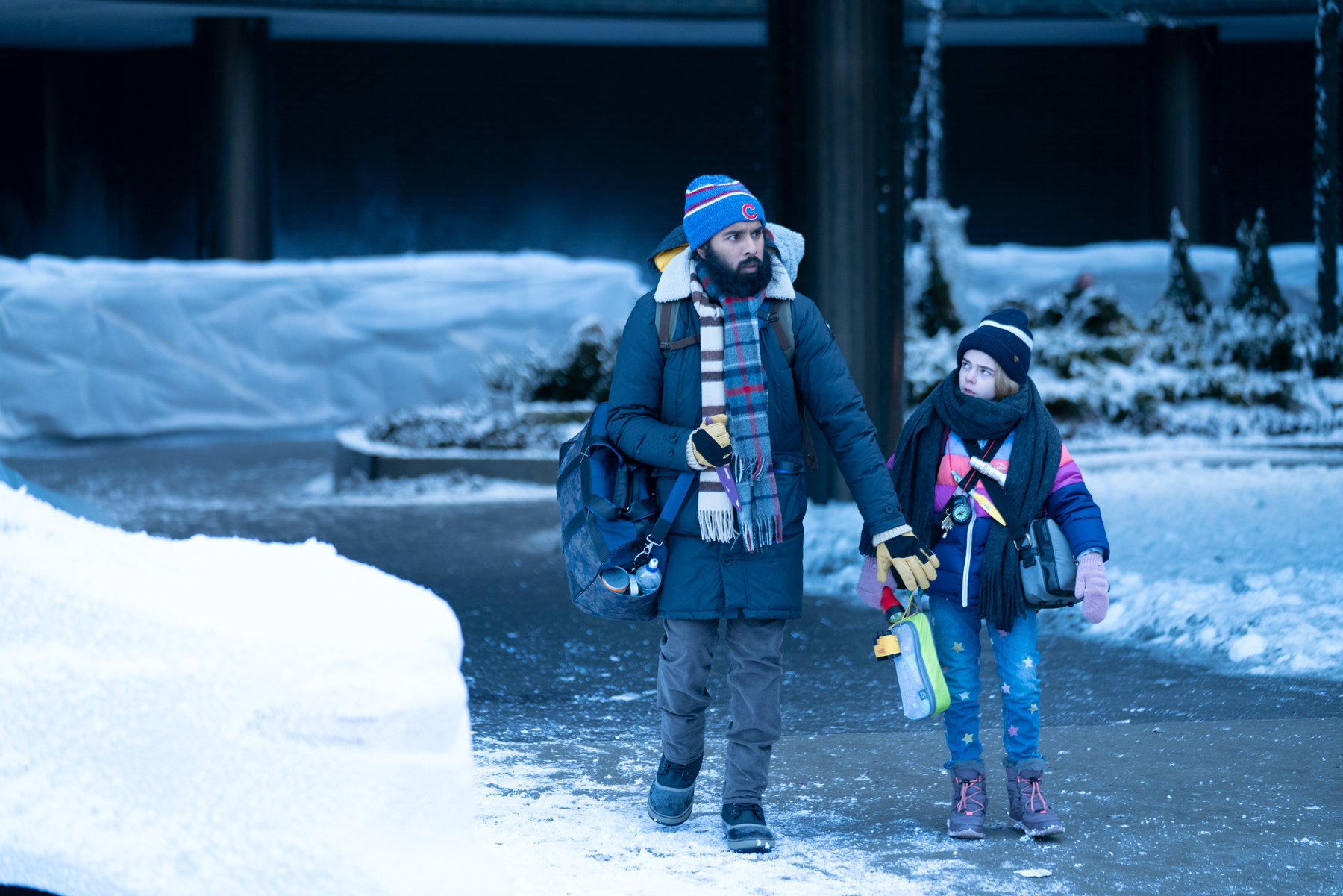 With our own real-world pandemic still dominating the news the instinct to swerve a drama with global disease at its heart is understandable. That would be a mistake though as the pandemic itself is barely depicted. The plague that devastates the planet makes the Black Death look like a December sniffle but there are no bottle episodes set in ICU, no anti-vaxxers marching on Parliament Square and no lockdown parties at number 10. Everyone’s dead. Even in the timeline where young Kirsten (Matilda Lawler) is guided through the aftermath by trainee paramedic Jeevan (Himesh Patel) death scenes are rare. Station Eleven isn’t a disaster epic piling up bodies in the streets or bringing forth monsters out of the rubble, it’s about what matters when you lose everything.

How ‘The Leftovers’ quietly became the most soulful show of the Peak TV era.

Creator Patrick Somerville has some form when it comes to mass death events. Between 2015-17 he wrote for The Leftovers, a series that dealt with the fallout after two percent of the earth’s population (140 million) simultaneously disappear, an event referred to as the “Sudden Departure”. Station Eleven has been called The Leftovers’ “spiritual successor” and there are definite parallels between the two. Like The Leftovers, it deals with how people come to terms with loss and the strain the new world puts on their relationships. While 2% is not 99%, at least Station Eleven survivors know how everyone died. On The Leftovers, civilisation is left intact but the trauma is no less real. The supernatural nature of the Sudden Departure inevitably led The Leftovers onto metaphysical ground where it sometimes floundered. That’s never a problem in the world of Station Eleven which, while definitely strange and sometimes scary, is clearly the one we recognise as our own – apples drop to the ground, ghosts are in the mind and the dead stay dead.

It’s that similarity that gives the choices of the Traveling Symphony added resonance. “Because survival is insuﬃcient” is their motto, a line lifted from of Star Trek Voyager (incidentally, from an episode written by Ronald D Moore, creator of the greatest post-apocalypse drama Battlestar Galactica). It’s not enough to live like cavemen, merely to exist. Ultimately, the end of the world must have meaning – there must be fulfilment, joy, purpose. That’s why the Symphony tour – not for some hokey “the show must go on” platitude but because art must continue to seek out deeper meaning in the mundane. In the scramble to live, never forget what makes life worth living. Survival preppers say you need food, shelter and guns but no one tells you people will always need Shakespeare. When you’ve been dragged back to the Stone Age, you can still build a world worth living in, perhaps one that may one day be explicable. 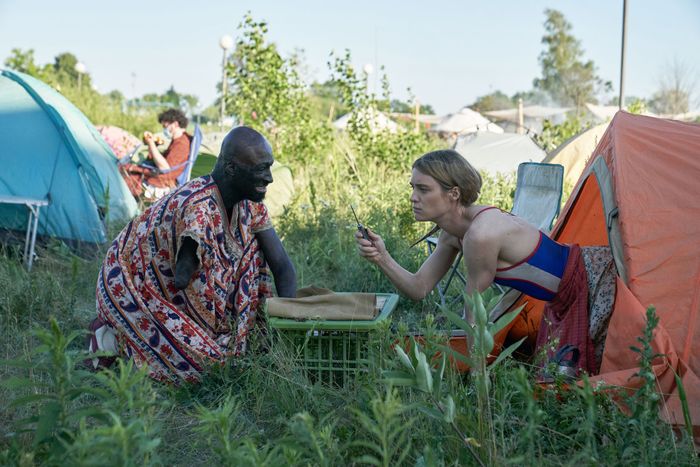 The result is a powerful meditation on humanity and art, rich in characterisation where the psychological mysteries that are teased unravel slowly. What is the ultimate meaning of Station Eleven? That’s very much up to you, as with the comic book. Its author Miranda says it ruined her life. For the Prophet, it’s the meaning of life. It’s a Rorschach blot test that ultimately reveals what’s most important to the reader. Seeing humanity survive, even thrive, without the buttress of civilisation forces us to question what is truly essential. The lesson could be that losing everything may not be as bad as you think. You may get a final act. The apocalypse doesn’t have to be the end of the world.

Station Eleven is available on StarzPlay from Sunday 30th January.