The English – Hugo Blick’s Western juggles a lot of plates and is ‘mostly’ a rewarding experience.

It’s tricky making a western nowadays. Just going route one and making a classic example of the genre is too cliched, and more than a little problematic given the standard “cowboys and Indians” narrative. Likewise, though, I think we’ve collectively had enough of the poe-faced anti-western sub-genre. The best examples of recent years have barely been Westerns at all (like Meek’s Cutoff) or consciously use the cliches of the genre to tell new stories, like The Harder They Fall. The English, a new co-venture between the BBC and Amazon, is a miniseries that tries to have its cake and eat it, making use of several established archetypes of the genre, while retaining a grim tone throughout. Despite this though, it ends up as something altogether more interesting.

The English is Hugo Blick’s first foray into overt genre territory since his underrated spy thriller The Shadow Line, and it shares many of the earlier series’ strengths and some of its weaknesses.

The miniseries slightly overreaches in some areas – trying to tell too many stories, keeping too many plates spinning at once for the number of character-building speeches that are crammed in. I love big speeches as much as the next person (I loved Midnight Mass and that was full of them!) and Blick has an undeniably good ear for evocative dialogue, but when there is so much going on in the plot, this sometimes feels like a luxury the series can’t afford.

Emily Blunt plays Cornelia Locke, an aristocratic lady seeking revenge for the death of her son. Traveling across the Atlantic to the open plains of America, she encounters the loner ex-cavalry scout, Eli Whipp (Chaske Spencer). Meeting in the midst of an incredibly volatile situation, they find themselves embarking on a journey across the dangerous plains, one seeking vengeance, one simply looking for somewhere to call home. And yet the two find their fates inextricably entwined as the full picture emerges.

Blunt is a revelation as Cornelia, and it might be the most impressive performance I’ve ever seen from her. She’s an enigmatic character whose every appearance raises more questions than it answers. At once sensitive and resilient, ruthless, and sympathetic, and always utterly humane. The determined, resolute love she bears for her deceased son is almost unbearably poignant, as is her final scene with the young Native American she rescues, and affectionately names “No Trouble”. Chaske Spencer judges his role just about right, largely playing against the stereotype of the implacable native American. It’s a tough needle to thread though, playing a character so clearly influenced by the cliche of the Native American as seen in old-fashioned Westerns, and yet still make Eli feel like a real person. On the one hand, he appears to be an unstoppable, impossibly skilled warrior, yet there is a sadness to him, bordering on self-loathing, explored in his internal struggle as he is forced to reconcile his status as both a US soldier and a Native American. The supremely tense sequence when he finally atones for his role in the oppression of his own people is a well-earned and truly cathartic moment. 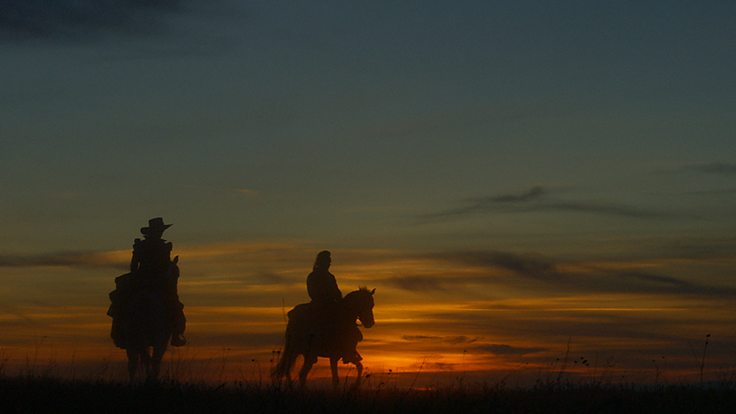 The whole series is shot beautifully, with a vivid colour palette and brightly lit vistas that are contrasted with the bleak lyricism of the writing, which recalls something like The Proposition. Every trope of the Western genre is thrown in and played with such a straight face that it almost defies you to take it seriously. This is especially true of the first episode, which is particularly self-indulgent, and too self-consciously stylised in places, suffering from some over-the-top “howdy boy howdy” accents from British actors like Toby Jones and Ciaran Hinds (who may as well be twirling his moustache with every villainous line delivery). Thankfully once the story begins in earnest everything improves, and as the series continues the characters are revealed to be more nuanced than they initially appear. 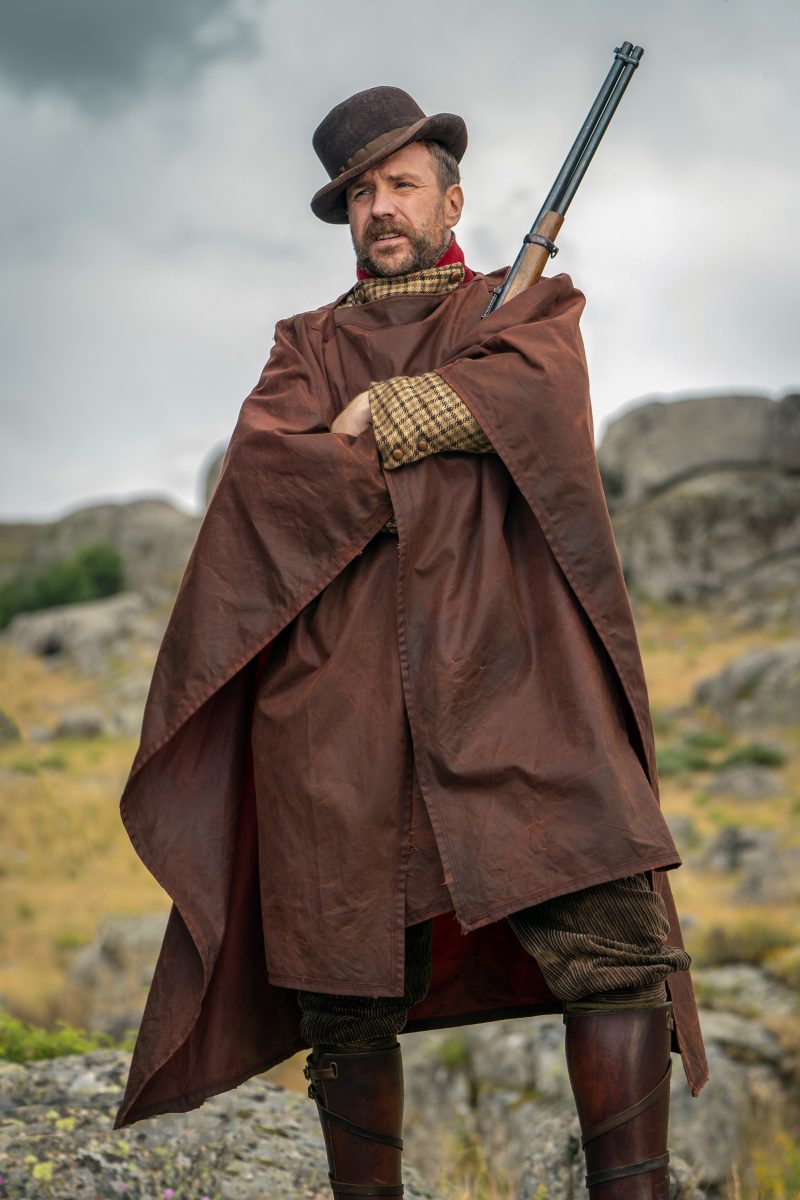 That being said, there is no such ambiguity for Rafe Spall’s gleefully malevolent landowner, Melmont. Giving perhaps his most impressive performance since his similarly disarming villainous turn in The Shadow Line, Spall is a terrifying presence, alternately obsequious and imposing. The chip on his shoulder stems from the very British notion of class division, something that is entirely absent from the Americas, which appeals to him a great deal, and allows him to indulge his more primal nature.

We’re clearly meant to think that Melmont somehow finds himself more suited to the brutality of the wild west, than British society, and it’s true that he seems uncomfortable, even subservient in his scenes in London. However, it’s telling that one of the most barbaric acts of the series happens not in the barren wilderness but in the supposedly civilised confines of a “pretty room” in a Victorian home. 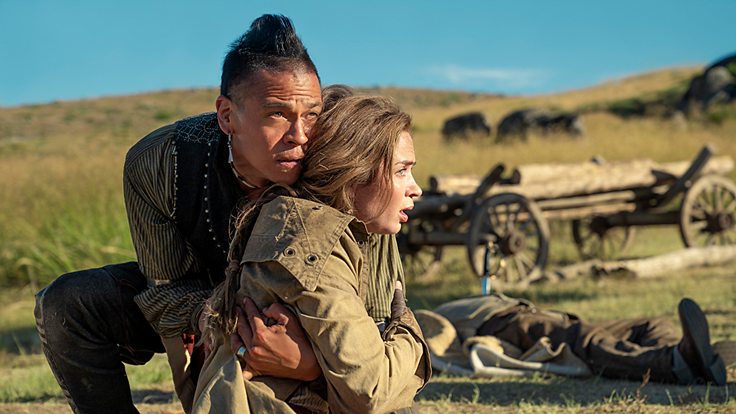 Thankfully this happens offscreen, something that Blick does throughout the series. He doesn’t flinch from showing the grisly outcome of violence, but he is never gratuitous, and the atrocities committed by the characters largely remain imagined rather than shown. Which is not to say that there isn’t any onscreen violence – there is – but it’s shown sparingly. When it arrives it is visceral and nasty but there is a restraint that makes it stand out.

Similarly, the romance is refreshingly chaste, and all the more compelling for it. It takes four and a half episodes for the first overt suggestion of romance between the two leads, and Blick is clearly more interested in the pair’s emotional connection than any superficial romanticism. The connection between Cornelia and Eli is real, tender, and vividly portrayed, and their inevitable farewell is every bit as emotional as it should be.

While the series as a whole is addictive viewing, I’m not sure how much each episode has to offer, with each one feeling vaguely unfinished when viewed individually. At the same time, the plot unfolds in a frustratingly episodic way, with several little vignettes that don’t always connect to the bigger picture, and guest stars introduced and unceremoniously killed off, leading to a sometimes untethered, disjointed feel.

With so many characters some are bound to get short shrift, and there are a fair few who are left with underwhelming or unfinished storylines – the mystery subplot involving mysterious marks on dead bodies is underdeveloped, as is the ongoing conflict between Trafford and Melmont. The series is defiant in its refusal to conform to conventional storytelling, with the narrative veering wildly from thrilling to frustrating, often within the same scene. This is never more apparent than in the final episode, where the demise of one of the principal characters is decidedly anticlimactic, and the final confrontation is ultimately unsatisfying.

It’s unnecessarily episodic in places, with certain one-off characters that feel like a “villain of the week.” Blick sacrifices a well-developed villain in favour of several one-episode antagonists, which may work on a weekly basis but makes for a slightly frustrating watch, especially when the primary villain doesn’t appear until over halfway through the series.

These quibbles aside, The English remains a beautiful, lyrical drama with a refreshingly colourful aesthetic. Blick trusts his audience enough that he doesn’t feel the need to spell out everything, even if you will need to at the very least watch this with subtitles on to understand what’s going on. As with The Shadow Line, this is a series that will inevitably be more rewarding on a rewatch, and it almost appears to be this way by design. The assortment of items lovingly shown in the prologue of the first episode all take on a greater significance by the end of the series, but you’d be forgiven for forgetting this sequence by the end of the series. On a rewatch though, this scene is laden with pathos. It’s not exactly difficult to make me cry, but I’ve watched The English all the way through twice now. The first time I cried at the final moments, the second time I cried at the opening scene.

The English is not a perfect show by any means, but it’s undeniably compelling right up to the final episode, full of beautifully evocative imagery, suspenseful set-pieces and powerful, moving performances from the two leads.

The English is now available on BBC iPlayer and on Prime Video in the US.