The Great British Bake Off: The Semi Final 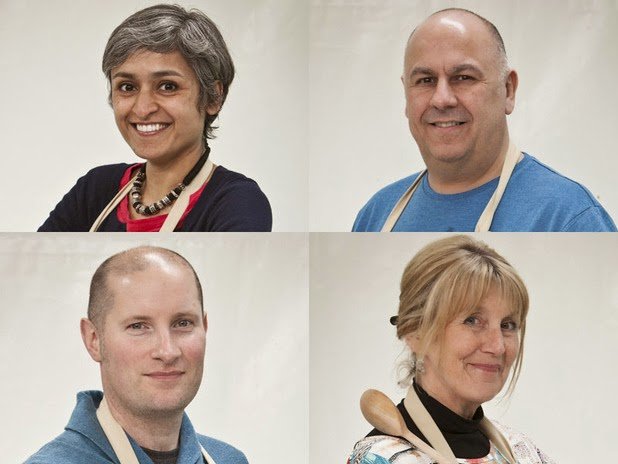 It’s week nine, it’s the semi final, it’s patisserie week. No further bombastic intro needed – this is where it gets serious. Chetna, Luis, Nancy and Richard remain and battled it out in a week that saw Paul whip his counting stick out and Mary talking big nuts. Time to sort the Patisserie Valerie’s from the Tesco bakery.

The opening signature challenge saw the remaining quartet bake-up two differing baklava, the Turkish treat made with filo pastry and covered in nuts and syrup. They could roll, fold or shred as long as there was 24 of them and they had the traditional distinct layers. In what feels like a weekly wet blanket these signatures didn’t quite feel like a final-deciding delectation but did, as ever, provide a platform for some imaginative interpretations. They also gave Paul a chance to pace smugly around the tent as if he was surveying his own Ottoman empire. Chintz King Luis provided his weekly dose of camp with Hawaiian baklava rolls accompanied by Indian Rose baklava. The Hawaiian batch marginally passed the Baklava ID test with Paul questioning their cup-like form, they didn’t fare quite so well in Paul’s taste test ‘they’re bone dry!’ he yelped. The Indian options rated slightly better ‘the flavours are great’ thought Paul ‘but the pastry is just…wrong.’ Richard, with the same pencil behind the same ear nine weeks later, decided on rose and pistachio and walnut and almond baklava. The rose set received all-round praise from the judging duo ‘the flavour is delicious and very traditional – bang on’ thought Paul. The praise from Mary was considerably more colourful ‘I like the nuts in big pieces!’ she grinned ‘that’s a winner.’ Rich’s walnut set were less successful with an under-baked result but ‘great flavour’ from Paul. Nancy, attempting to fight back after a tough week last week, baked breakfast baklava with muesli and a fitting coffee and chocolate counterpart. Her breakfast bunch were praised by Mary and Paul, despite lacking the required rich golden brown colour Paul thought the taste ‘good, and the texture is there too.’ Both judges praised the key layers and resulting crispiness. Her coffee batch went down well, too ‘the flavours are good, overall you’ve ‘got’ what baklava is’ praised Paul. To Chetna, ah Chetna. If you’ve been reading these blogs (well done, you must’ve had a quiet Autumn) you’ll know she’s the only baker that I’ve yet to…I just…I don’t know…Chetna who? I just can’t decide whether she’s quietly brilliant, spectacularly bland or just a plain fluke success story. That aside, her chocolate orange and masala chai baklava received a lukewarm reception from the cantankerous duo with Paul describing the chocolate lot as ‘interesting’ with a ‘delicious’ taste but lacking in the all important layers. Her Masala baklava’s received Hollywood’s praise for their colour but Mary thought them ‘perfectly formed’ despite being ‘a bit heavy on top.’ Something that must’ve resonated with Paul. 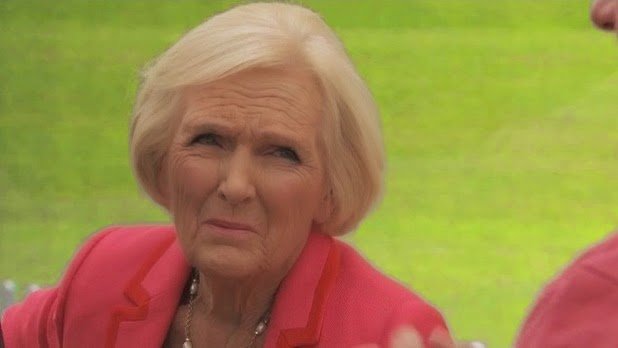 The semi final technical challenge saw the mercury rise after a relatively tough signature round for the foursome. Richard succinctly summed-up this week’s challenge ‘another one none of us have heard of’ he cringed. The bakers were tasked with a schichttorte ‘a little tricky German patisserie’. They had two hours to concoct this multiple layer cake (Daniel Craig not included) that must include an astonishing twenty alternate light and dark layers all grilled individually to perfection.  I consistently find the technical round frustrating – yes, it’s funny watching them struggle and yes it’s a challenge in every sense of the word but I miss the imaginative twists each baker provides and find it frustrating that we spend most of the round watching them flapping over measurements and durations.

With the gingham alter looking decidedly minimal the remaining four lined-up for judgement. Chetna limped home in fourth place with Mary chastising the lop-sided stature of the bake and Paul, knife doubling as a counting stick, totalled a meagre seventeen layers despite claiming the ‘flavour is ok.’ Nancy took third place with her torte, Mary enjoyed the ‘lovely shine’ on the icing but the finished piece was let down by the lack of layers (eighteen…heaven forbid) and melting icing. Richard took second place with his web-topped offering. Despite meeting the twenty layer requirement Paul deemed them too thin. Rich’s shiny top receiving the most praise. And his cake icing. (Bald joke..sorry, I’m allowed to make them.) It was left to illustrious Luis to take first place with his finished torte. His light and dark layers were described as ‘beautiful’ by Mary who thought it had a ‘good height and a very professional finish’ Paul was thrilled with the layers describing them as ‘very, very good’ with a ‘nice flavour’ to boot.

Being the semi final, the showstopper did not disappoint. The bakers were set, in the words of Ms Berry, a challenge that must have ‘the polish and finish better than anything ever before’. Think the window of that posh bakery you walk past on your way to Starbucks. They must create two different types of the traditional entremets patisserie offerings that were precise, beautiful and elegant. In a challenge that tested numerous techniques under extreme time pressure all four of the guys performed impressively well and took us to a nail-biting showdown…

Luis opted for pomegranate and pistachio and cherry and chocolate entremet’s. Paul salivated over the ‘delicious’ pomegranate jelly with Mary describing the overall display as ‘really sensational.’ Paul summed up Luis efforts as ‘very, very good little entremets.’ Richard received sensational all-round praise from the judges with Mary describing the consistency of his grapefruit, almond and vanilla serving as ‘perfect.’ His hazelnut mocha alternative were equally lauded, Mary praising the clear layers and flavours and Paul calling them ‘extremely good.’ A compliment that led to a grin from Richard wider than the Thames Estuary. In a round that naturally seemed to lean heavily on the visual impacts of the bakes Nancy presented her lime mousse and passion fruit entremets alongside raspberry nonnettes with an almond sponge. Paul, not impressed by the physicality of either, though criticised the decoration of the lime set as ‘not particularly striking’ but though the chocolate and lime worked really well together. May declared the raspberry nonnettes as ‘stunning’ with even Paul praising the  intricate raspberry square Nancy had implanted in each morsel. As the tension rose, and we approached the looming decisions we’re left with Chetna, who went for chocolate, orange and hazelnut alongside cappuccino entremets. Mary was less than impressed with the chocolate orange set for their indistinct layers of colour. The bulbous weight of the chocolate work on the cappuccino entremets over-shadowed the flavours that Mary thought ‘most beautiful.’

In a finale that showed just how close the team must be on the show, a visibly emotional Mel announced Chetna the final baker to leave before next week’s final. It felt a fitting, inevitable decision considering the relative consistency of the remaining three. As Mary said ‘she didn’t have the panache her fellow bakers had’ and I’m satisfied the final trio really do deserve their place in the 2014 Bake Off finale. With Richard crowned the star baker for the fifth time the countdown begins…

It’s the final…let’s play nice. There’s not a bad egg amongst them.

Jordan. I am praying for another matching shirt and hair clip combination.

It’s a Richard v Luis final. The winner? This is like choosing your favourite parent. I think its Luis for his incredible creativity, consistency and downright humble approach to boot.

The Great British Bake Off: The Final. Wednesday at 8.00pm on BBC ONE.

Read our review of Week 8

Read our Review of Week 7

Read our Review of Week 6

Read our Review of Week 5

Read our review of Week 2

Read our Review of Week 1