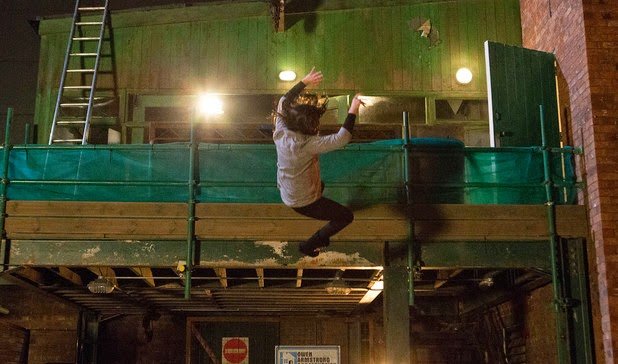 Michelle Keegan’s exit from Coronation Street has been heavily trailed by ITV for weeks but last night viewers finally found out the identity of Tina McIntyre’s killer. After an intense showdown on the builder’s yard balcony, Tina was pushed off the edge by Rob Donovan (Marc Baylis), the brother-in-law of her lover, Peter, and the man she had previously shared a kiss with a few months earlier. The Custard TV met with Marc Baylis and producer Stuart Blackburn last week to discover how he felt about being the Corrie killer and his thoughts on the what it means for Rob’s future (and his own!) on the Street.

Whilst the audience have been kept in the dark for weeks about the identity of Tina’s killer, Marc had in fact known since last autumn after being called into a meeting by Coronation Street producer, Stuart Blackburn.

“It involved a lot of work and personal embargo to keep tight lipped about the storyline but it is a relief that people finally know it is Rob and that I can finally talk about it.”

After being revealed as the killer he joked that he would be avoiding walking down the street from now on (“I might have to swim across the canal to work to avoid people”) but insisted that Rob is not a natural born killer:

“The killing is accidental, it wasn’t Rob’s motive to kill Tina when entering her flat, his instinct is to protect his sister, Carla, from finding out about her husband’s affair. At heart he is a family man and when his back is against the wall he will lash out and protect his family, that includes both Carla and Tracy”.

The first time Rob was in prison it was due to an incident helping his mum and now he is protecting his sister, there is a definite sense that history is repeating itself.”

Stuart Blackburn agreed and went further by saying that he hopes the audience will have sympathy for Rob in the coming weeks and months, explaining that his background and desire to protect his loved ones will drive him to keep his secret under wraps.

“His background is brutal- he had a harsh upbringing with an alcoholic mother and a succession of stepdads. He comes from a world of poverty and violence; he literally came from the gutter.”

Stuart said that early on he had noticed glimpses of a darker edge to Rob and had been looking for a story ever since in which Rob could be backed into a corner in order to see what he would really do to defend his sister, and increasingly Tracy. Whilst they wouldn’t reveal whether Rob confesses his secret to his fiancé, they both agreed that Rob wouldn’t set up Tracy for Tina’s murder, stating that he would do everything possible to point the finger in another direction.

“Rob always backs up Tracy, he sees another side to her at home that the audience don’t see. He knows deep down that she doesn’t mean to be horrible, and whilst he sometimes tells her to shut up, it’s affectionate, their relationship is genuine. They are the Bonnie and Clyde of Coronation Street.”

Whilst Rob will do anything to protect his sister and fiancé the same can’t be said for his brother-in-law, Peter. Rob found out about his affair with Tina before her death and actively loathes him.

“In a way it has been a long time coming, Rob finally has something against Peter in black and white which he can use to manipulate him, although the last thing he expected was to murder someone!”

So what does this mean for Rob in the future? Marc wouldn’t reveal too much but admitted that Rob will try to cover his tracks in many different ways.

“This is the beginning of a massive new chapter for Rob. Up until this point it was the happiest Rob has been in both his personal life and adulthood, we will see a lot of changes in him in the coming months. He’s not stupid either, he knows where to point the finger and when to play the innocent to protect himself. He will cast shadows onto other characters and become more family orientated.”

Stuart and Marc stressed that the storyline is not a typical black and white story through to the end but instead will have a lot of grey areas and that the audience will get to see a human side to Rob. Marc was not sympathetic to him but said that we will see that he has a conscience and remorse for Tina’s death.

“In order to play him I have to like him but he’s not a born killer. We will get to see how he deals with it psychologically.”

As for Marc’s own future on the show, he admitted to some trepidation about his future when first told he was Tina’s killer but said he was relishing the responsibility of being a central part of such a huge storyline:

“From an acting point of view it is a privilege to have such a great job and to be having such a wonderful experience working on the show, and to be picked out of all the characters to be the killer.”

Stuart wouldn’t put a timescale on the storyline but hinted it would last throughout the year and teased that there were lots of twists to come over the next few months.

“My key words are consequence and change. The show is about a small community and the storyline will affect the characters in the factory and in the Barlow household. It has a ripple effect and will even transform some lives.”

Whilst some viewers guessed that Rob was the killer there is a definite sense that this is only the beginning of the storyline and it will be interesting to see how it develops over the coming weeks and months. Someone will have to go down for Tina’s murder but will the right man be caught? Stuart teased that in soaps the suspect usually gets caught eventually… but not necessarily the right one. We look forward to seeing how the storyline develops!

Coronation Street Continues all week at 9.00pm on ITV.