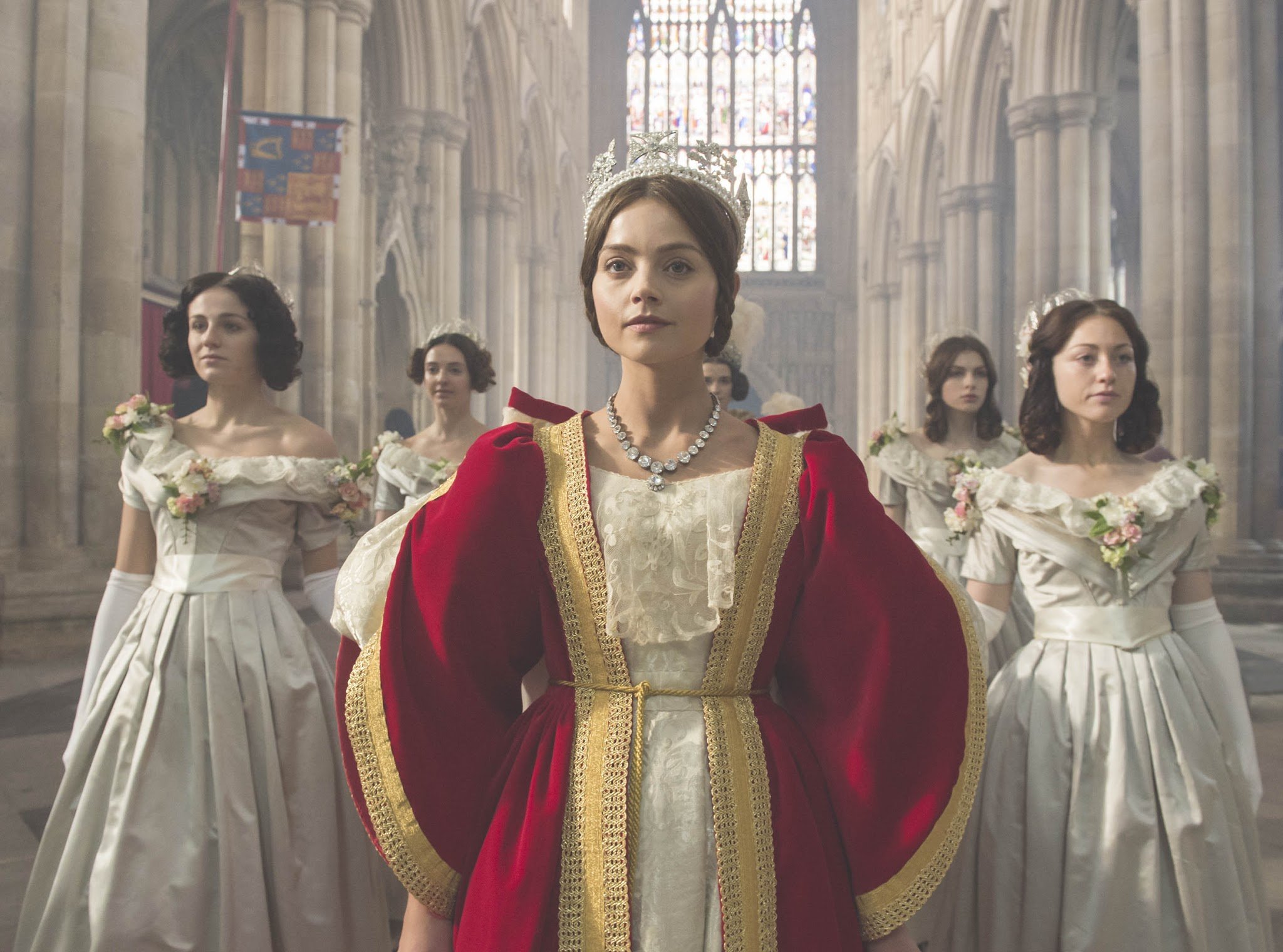 Considering she has been quite memorably portrayed innumerable times in the past, on both the small and big screen, the task of finding a fresh angle from which to explore the life of Queen Victoria is a daunting one. Add to that, the fact that one of her most recent cinematic outings in the well received The Young Victoria, covered the same period of her life as ITV has set out to do in their flagship autumn drama Victoria, and the need to strike a different chord in order to entice and maintain audiences is further magnified. And while this feature length opener is well written and beautifully shot, it’s a pretty straightforward and familiar entry to the genre, in that all of your standard period drama archetypes and tropes are present and correct. But given that this is based on real people and events, who is to say that Queen Victoria and her court weren’t the inspirations for some of these archetypes and tropes to begin with.

Opening in 1837, upon the death of King William IV, we’re introduced to the eighteen year old, wide-eyed and curious Victoria (Jenna Coleman) during the whirlwind that is her ascension to the throne. Amidst this whirlwind are a flurry of allies and enemies, all watching as the diminutive new monarch takes her first steps. Chief amongst those allies, is jaded Prime Minister Lord Melbourne (Rufus Sewell) who is tasked with guiding Victoria through the various responsibilities she has just inherited as the new head of state. On the home front, Victoria promotes her loyal childhood governess Baroness Lehzen (Daniela Holtz) to run her new household, which the Baroness takes full control of when she successfully suggests moving the whole court from Kensington Palace to Buckingham Palace. 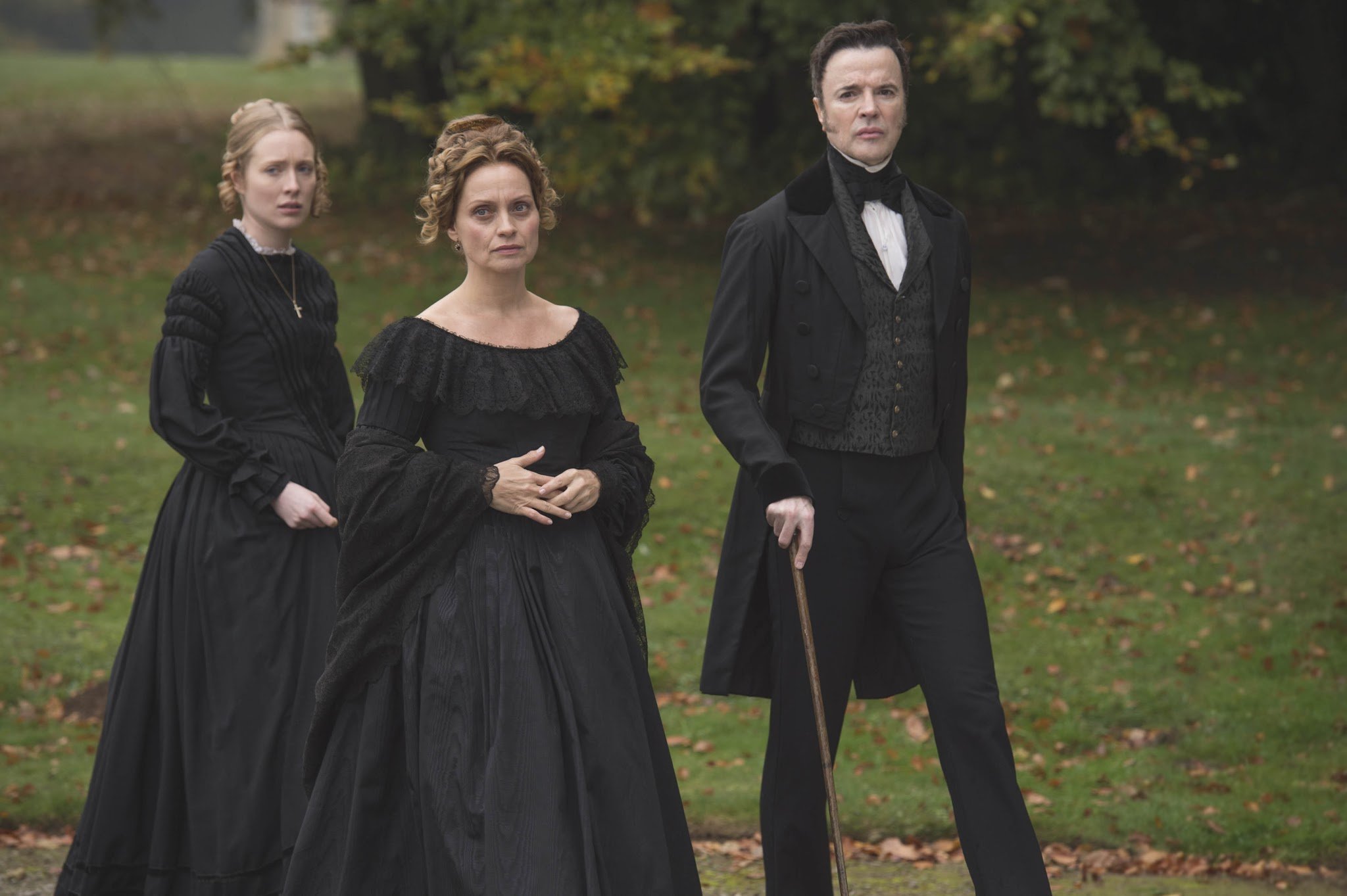 Angrily relegated to watching Victoria’s sweeping changes from the sidelines are her easily led mother, the Duchess of Kent (Catherine Flemming), the Duchess’ devious comptroller, Sir John Conroy (Paul Rhys) and Victoria’s jealous uncle, the Duke of Cumberland (Peter Firth), a triumvirate of the old guard, each with their own agenda. Much of the early conflict is derived from Sir John’s fruitless attempts to continue to exert power and authority in the household as Victoria throws off the shackles of his childhood control and aligns herself with people that her mother and Sir John consider unsuitable, namely Lord Melbourne. There’s also the timeworn subplot of Upstairs Downstairs type relations focusing on a number of house staff that represent all of the usual below stairs archetypes – haughty Mrs. Jenkins (Eve Myles), impertinent Mr Penge (Adrian Schiller), the young and earnest Brodie (Tommy Knight) and mysterious newcomer Skerrett (Nell Hudson). Given that much of the downstairs storyline focuses on the selling of second hand gloves and a dispute over cheap candles, their presence seems a bit trivial in the opener but will hopefully be warranted in later episodes, otherwise it will be a waste of good acting talent and a distraction from the bigger story. 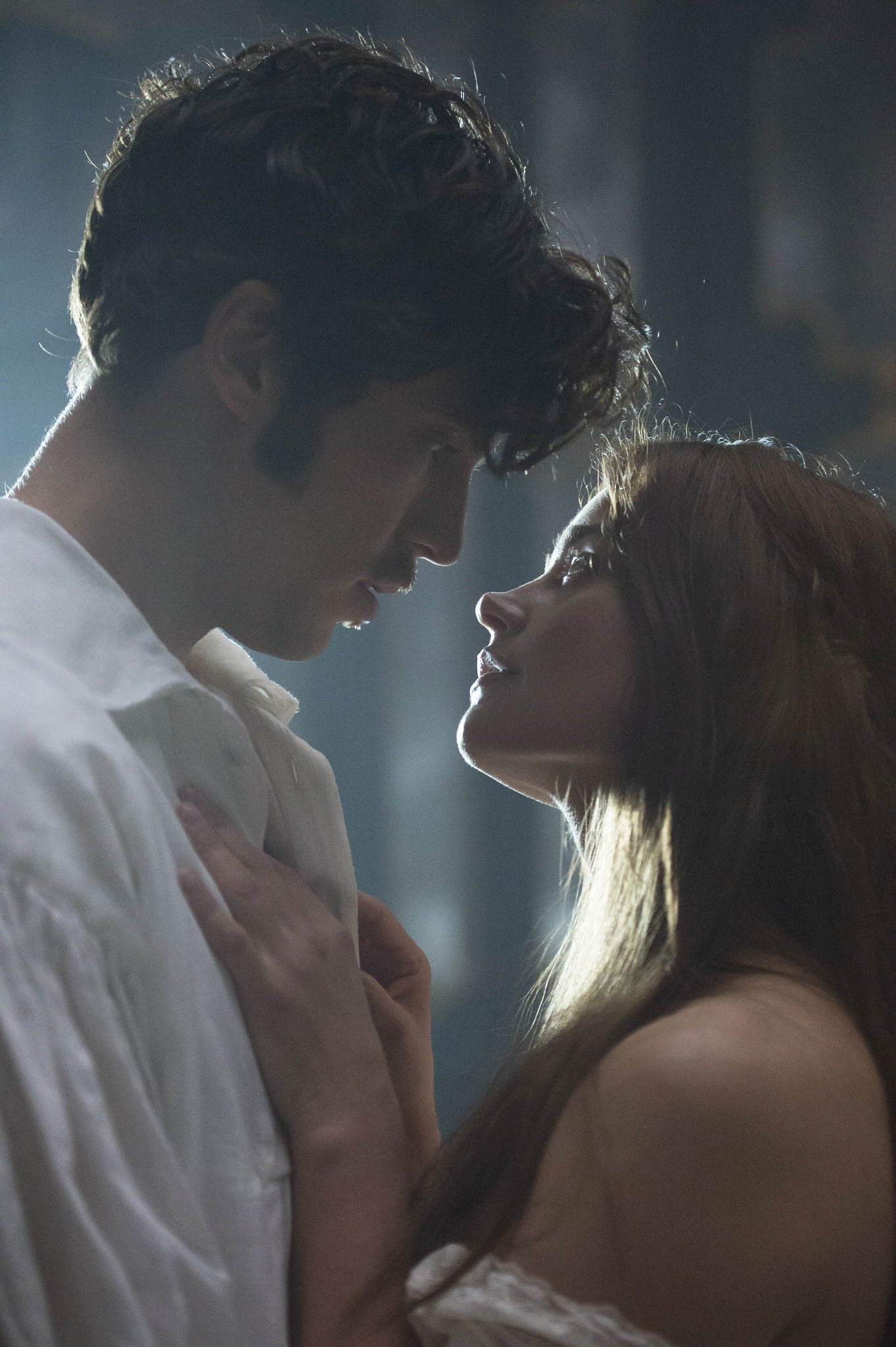 The crux of all period drama is romance and intrigue, so after the obligatory establishment of all of the major players, Victoria begins to introduce both plot elements apace. Victoria’s innocent admiration of Lord Melbourne soon lends itself to rumour which in turn nearly becomes truth, as her growing feelings for him become known (“I wish I could dance with you every night”, she drunkenly exclaims at her coronation dance). This is of course doomed to fail, as the man is forty years her senior and was once rumoured to have been involved in a “criminal conversation” with another woman. But given his proximity to Victoria as her private secretary, it should make for an interesting dynamic between the two as the story progresses.

The palace intrigue between Victoria and Sir John also claims it’s first victim as the Duchess’ lady in waiting and Sir John’s minion, Lady Flora Hastings (Alice Orr-Ewing) is “thrown under the bus” (or “under the house and carriage”, if you will) in the war between the monarch and the comptroller. Blinkered by her determination to remove Sir John from her life, Victoria allows herself to believe rumours of a “criminal conversation” and subsequent pregnancy between he and Lady Flora. Against advice, she doggedly insists that Lady Flora is medically examined to prove that she is with child, thus giving her reason to expel Sir John. But when it is discovered that she is in fact gravely ill rather than pregnant, her death and the ensuing press scandal are a wake up call for the young queen. It is a bleak but sobering bookend to the episode as the strong willed and rebellious Victoria that was so obstinate when she ascended to the throne, now realises and embraces the responsibilities that royal duty has brought her, following her first embarrassing and very public misstep as Queen. 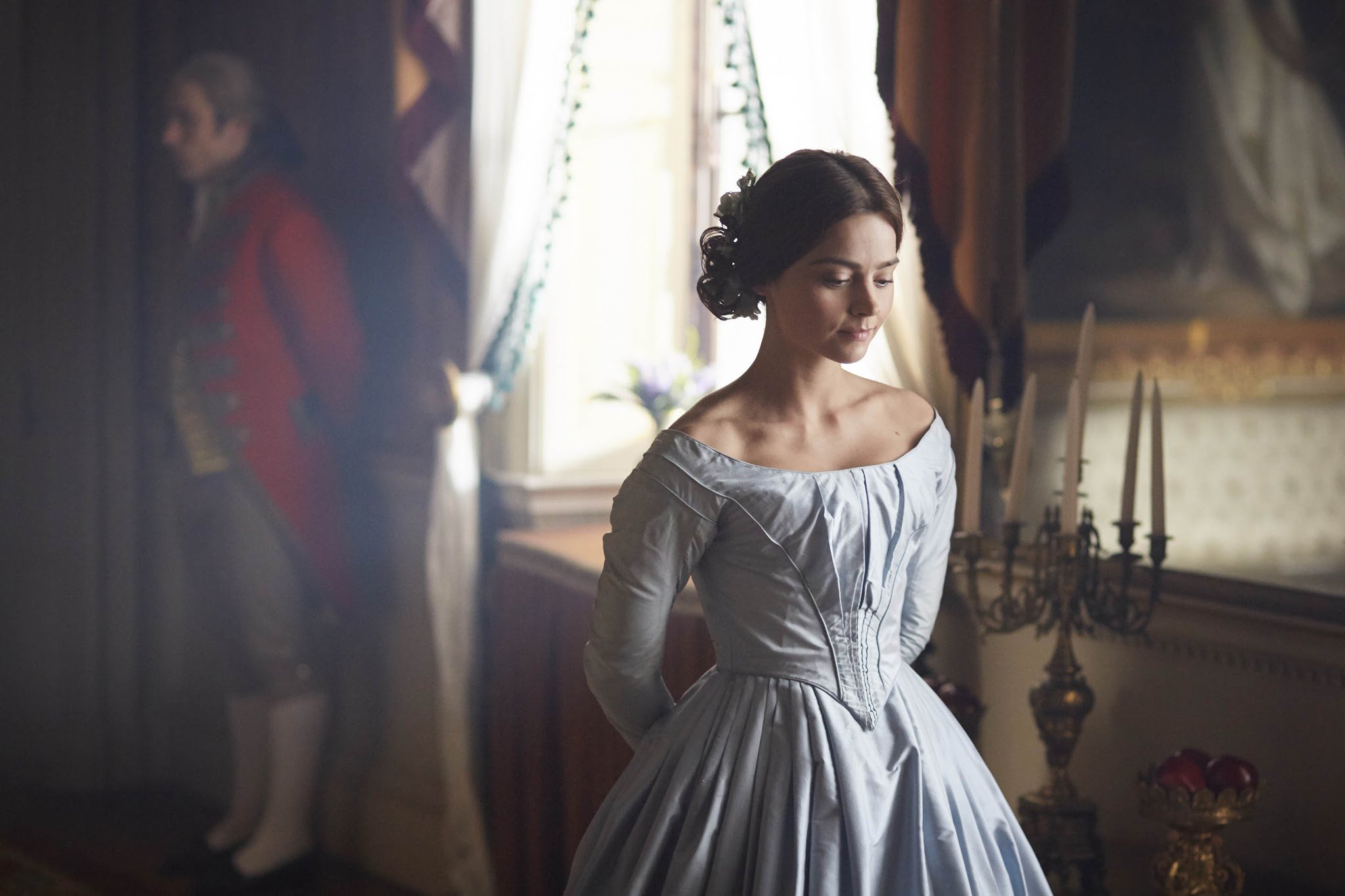 Jenna Coleman’s portrayal of Victoria is enjoyably divergent. Rather than the classic tale of a new monarch being overcome by the burden of royal duty, she plays Victoria as willing and excited, unafraid to take on her new role as she sees it as an opportunity to escape the tyranny of her upbringing and to establish herself as her own person. This is a welcome departure from the traditional picture that people have of Victoria as a stern matriarch in her later years. Rufus Sewell is also excellent as the advisor who has seen it all but still feels bound by duty to carry on, despite long being over it. At £10 million for eight episodes (the second of which plays Monday night), the production values are generally quite high too. While it doesn’t quite match the chocolate box prettiness of the BBC’s recent War and Peace, the scenes set in and around Buckingham Palace are very pleasing to look at. Where it does fall down, is with the CGI used in crowd scenes like Victoria’s coronation at Westminister Abbey. While this obviously isn’t a drama relying on special effects to move the story along, these occasional scenes look somewhat artificial and out of place in comparison to the rest of the episode, with the CGI being akin to the often cheap look used in former Starz series Spartacus.

One of the main problems that Victoria faces is whether it will be able to step out from beneath the shadow of the the late, lamented Downton Abbey. Ever since the former ITV mega-hit debuted in 2010, the press have been keen to label every new period drama from The Paradise to Mr Selfridge to the upcoming The Halcyon, as the “new Downton”. By taking over Downton’s old timeslot, Victoria has already been hailed as it’s natural successor. This is an albatross that could work against the show given what an internationally acclaimed, ratings juggernaut Downton Abbey was. Also in terms of narrative, had Victoria steered away from exploring the downstairs exploits of palace staff, the similarities wouldn’t be as pronounced and it could have maintained a level of uniquity, but at the moment it looks like it’s shaping up to be a more regal version of Downton where the sets are grander and the stakes are higher but a lot of the players are in the same mould.

The period drama has long been a beloved staple of British television screens, so I’m sure Victoria will be well received by viewers, although maybe not as revered in years to come as say the BBC’s fabled Pride and Prejudice of the mid-90’s or the aforementioned Downton Abbey. Even more recent productions such as BBC’s War and Peace and Poldark managed to have an edge and something that made them pop off our screens whereas Victoria kind of feels like “period drama by numbers”. It’s enjoyable to watch and does enough to hook viewers (myself included) in, to return the following week, but really there is no new ground being broken here.