What to expect from the final series of The Bridge

Have you ever been so excited you put your fist in your mouth to suppress a squeal of glee? Have you ever been so excited that you could swallow your own fist down and keep going up past the elbow and beyond, squealing away regardless? It’s not often I go full fangirl about anything, but guys, it’s nearly time to see the very last series of The Bridge! And I am so excited. You can keep your Infinity War. This is the original most ambitious crossover event. It’s time for Denmark and Sweden to put their differences aside and work together again on outrageously gruesome killing.

Along with The Killing, The Bridge should be credited with helping to start our obsession with expertly plotted Danish crime drama. It is still the highest-rated drama in BBC Four’s Saturday night foreign drama slot which explains the BBC’s decision to promote Saga’s swansong to BBC Two. It goes without saying that someone is murdered near to the Oresund Bridge. Yes, it’s a woman and yes it’s totally brutal. However you feel about that on TV more generally, you have to admit this is The Bridge’s classic calling card. Why change now? This woman is Margrethe Thormod, the Head of the Danish Immigration Board. And she and her team have recently been in the news for all the wrong reasons – filmed clinking champagne glasses and celebrating the deportation of a gay man back to a Muslim country where he will most probably be executed. Taariq Shirazi has gone to ground and Margrethe is murdered in a way that seems to have cultural and religious connotations. Is there a connection? This final series takes place 2 years after the hellish events of the series 3. Saga (the incomparable Sofia Helin) is in prison awaiting sentencing for the murder of her mother. As you’d imagine, she’s not doing well; actually preferring solitary confinement over interacting with the general prison population. Yes, she needs routine, but none of these imposed routines are her choice. Stuck mentally and literally in a bad place, how will she and Henrik be able to work together? Henrik (Thure Lindhardt ) looks to be doing better, off the drugs and going to a support group to talk about his missing children.

In Saga’s absence, Henrick is joined by Jonas (played by Borgen and The Killing II’s Mikael Birkkjær), charmless unreconstructed cop, dishing out offence like it’s 1979. He refers to Taariq as “the homo” and keeps being told to learn his name. The cuddliest part of him is his lovely sweater, but honestly, it’s refreshing not to have yet another cop on the payroll struggling with some deep unresolved trauma.

The murder investigation quickly leads to the left-wing activist group Red October. Yes, Henrik and Jonas are literally on the hunt for Red October. Journalist and apparent expert on these groups is Richard, working with his creepy twin brother who apparently thinks it’s fine to impersonate his more famous sibling to impress women in bars. Alongside these men (who look to be about to bite off more than they can chew) we’re introduced to violent and unpredictable taxi driver David, his abused wife Sofie and their son Christoffer. We know that despite seeming disparate, eventually, these people will link up to the case and to each other in an elegant fashion.

Writers Hans Rosenfeldt and Camilla Ahlgren have promised an extraordinary end for Saga, and it will be final, no take backsies. Broadcast in Europe earlier this year critics and fans hailed it as the best series yet. Given the outstanding storytelling and mesmerising acting over the past three series, I couldn’t be more excited if I tried.

The Bridge starts on BBC Two on Friday 11th May at 9pm, all previous series’ are available on iPlayer now. Sofia is also supporting WaterAid’s Water Effect campaign; wateraid.org 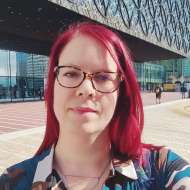