On the set of No Offence with Joanna Scanlan

For today at least, the roles are reversed. Having been tucked away somewhere at the unit base revising her lines, Joanna Scanlan is now the one facing questioning. In a tiny canteen by journalists that is.  Three years ago the post-watershed British public fell in love with Joanna’s incredible performance of DI Viv Deering. She was an instant classic character. It must be tiring playing such a high-intensity character, all day every day for six months? “I do find it tiring, I’ve found it harder this year because it’s the first time we’ve ever shot in the winter. I don’t know if it’s real but it feels like it’s been a longer and harder winter and of course Manchester is very wet so we’ve had to contend with a lot of outdoors and night shoots and we actually had to stop filming during that snow. It’s been a big challenge this year. I have more of a say in how we tell the story. Writing requires standing back a little bit, looking at it and letting something filter down and land on something. It’s very hard to act and write at the same time, to have that editing mind and the acting mind. It’s almost like you get hijacked as an actor by the character.”

Was it daunting to return to Friday Street? “I was excited to do a third series. The first series you’re finding it, the second series you’re consolidating it and I feel there was a lot we achieved in it. I felt that potentially the third series would be the best series.” Do you still feel that now? “At this stage, it’s almost impossible to know. We’re right in the middle of what I call the spaghetti with all the different strands crossing over”. Does this third run bring a new dimension to the show? “The first series was personal. Deering had her own in-built drama, the enemy was within. The second series was quite abstract and this one is a bit of both. It’s a balance of the personal and political stages.”

How does Friday Street respond to the events? “We’re motivated to bring justice but they carry on working tirelessly. They find themselves in a complicated web which they didn’t appreciate excited which are local but have national implications. It’s a web of dark forces. Is it all as topical as it sounds? “Things are moving so quickly both geopolitically and domestically that it‘s hard to know if it is going to still be topical. We’re in a very volatile political arena, it’s definitely in the wake of Brexit.” The new blood in Marilyn Merchent is clearly a welcome addition too “I really enjoy working with Claire Rushbrook. We’ve never worked together before. She’s a boss but she has sympathy with Deering’s intentions, if not necessarily the methods – they’re even neighbours! There’s a quirk, I suppose it could get edited out where she’s moved into the house opposite so there’s a sense of mirroring between them. It’s as if they are two halves of the same woman! That’s been a really nice relationship, lovely to play.”

Viv is a very complex person but what do you think are her qualities? “She never has any moral indecision. She has absolute integrity. She’s courageous, selfless. She’s vulgar – shameless, to use a phrase!  Brave too,  she has massive emotional intelligence and as such is a good team leader. Her faults are all forgivable. As I see her she’s rebellious and there’s the hypocrisy in using the authority of the crown but being anti-authoritarian but she’s only ever using that to a good purpose so I find that forgivable. To play her, you do feel like you can say what you think. In life, I would be more cautious and think through the consequences of saying what I think  but actually, Deering doesn’t so it probably does rub off a bit on me!” Joanna herself is softly spoken, contemplative and gives every question a thorough examination before giving out enlightening and detailed responses.

How do you get into the Viv mindset? Does costume help? “I don’t wear any of the clothes she wears. I don’t wear tight skirts, tops. leather jackets and high heels but actually when you put it on for Deering it’s a complete transformation. I think the process of changing is the adopting of the character. It’s a bodice that becomes armoury!”

Meanwhile, at Friday Street there have been strange goings on. “They have a set of loos on the set that are obviously fake loos and they’ve been repeatedly defecated in! They don’t flush, there’s no water in them!. Those loos have been put to ill purposes I’m afraid! The first series it happened because someone made a mistake! This time it has happened more times than it should and seemingly at points where no one should have been in there. I remember someone saying it was in three of them so it’s more than one person unless they’ve got the vast bowel of being able to spread themselves across three loos in one incident!” Are the toilets still a focal point in the show? “It’s for the lighter and more intimate moments. It’s where things can be said that you wouldn’t say in the office. They used to do that in Ally McBeal! There are very significant scenes in the loos.”

What about a fourth run, where do you think the show can go? “Whatever magics itself into being. It’s really worthwhile and saying something about society from an unusual angle. I don’t think there’s any other British telly that takes the same stance because there’s a levity in it and also a joyfulness and energy. That’s quite an unusual cocktail I think. If you go out seeking controversy in broadcasting you end up looking like a bit of a twit. It looks obvious that you’re trying to go for shock value or sentimentalism. I think when controversy strikes it’s often very unexpected because of some context that’s changed. When you have something like #metoo’ or #timesup and something you put out may not be favourable to women is going to read very differently and create a journalistic storm. I would say that we are trying to be truthful to societies current possibilities rather than seek or succeed in having any controversy.”

We leave Joanna to go back to learning her lines which, and I’m going out on a limb here, will be performed to perfection. It’s so good to have Viv Deering back. Television hasn’t been the same without her. 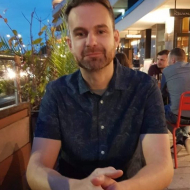